You are here: Home / Latest News / A nation united in grief
Search

A nation united in grief

The beheading of 21 young Egyptian Copts in Libya by jihadists aligned with ISIS has sent a shockwave across Egyptian society and has united people of different faiths in sorrow and outrage. Many Egyptians have seen in full the horrifying video, including the moments when the captives prayed before their execution.

A SAT-7 journalist in Cairo described how on Monday “it was non-stop all day on Facebook– people paying condolences to the families of the dead.”

Ramez Atallah, General Secretary of the Bible Society of Egypt, wrote that “The gruesome, professionally-produced video of that execution shocked the country and has united Christians and Muslims as never before”.

Soon after the video was broadcast on Sunday evening, Egyptian President Al-Sisi declared seven days of mourning for the nation. He met with the senior leaders of the Coptic Church to express his condolences. Egypt’s prime minister travelled to Upper Egypt and sat with members of the small, tight-knit village in southern Egypt from where the ex-patriate workers had gone to Libya to find work.

SAT-7’s Bridges current affairs programme also visited the village to talk with the victims’ families. George Makeen, the programme’s producer, said “the families’ grief and anger was intense”. The SAT-7 ARABIC channel will include these in Bridges on Saturday, and is planning to screen some of the material ahead of the show as a way of standing in solidarity with a community in mourning.

Since the start of the year, SAT-7 ARABIC has broadcast Pope Tawadros’s weekly message live each Wednesday, as part of its service to the Coptic community – the largest group of Christians in the region and estimated at about 10 per cent of the Egyptian population.

On Tuesday (17 February), Pope Tawadros led a service in memory of the martyred men in the Coptic Cathedral in Cairo’s Abbasyyia district.

He told participants, “Our brothers who died in these circumstances and lost their lives on this earth… have gone to heaven. As we have heard and seen, they were steadfast in their Christian faith. We have seen how they asked for God’s mercy and asked to join the kingdom of God as their last prayers before they died.”

Quoting Psalm 65 (“Blessed are those you choose and bring near to live in your courts”), he said God chooses those he calls to die; blessed are those chosen by God.” He went on to say “This explains what Paul wrote to the Phillipians: “I am torn between the two: I desire to depart and be with Christ, which is better by far.”

Pope Tawadros said, “Death is a meeting in heaven: it is being in the presence of God. The eyes of those who left the earth were raised to heaven as if it was expecting them and getting ready for them: they became part of heaven and their hearts were focused on heaven”. With reference to Psalm 39, he said as we are strangers on earth, “There is no real happiness for man on this earth but in heaven.” At the same time, he said, “We say goodbye to our loved ones with all our hearts.” 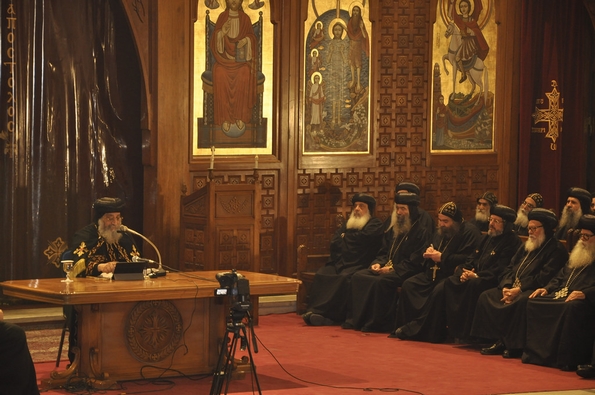 The Pope stressed that “They were sons to this country Egypt”. As evidence of this, he pointed to “what was in all of the Egyptians’ hearts” – “the feelings of worry and sadness over the God-given human dignity that was trampled upon”, along with the messages of condolence given by President Sisi, by the Grand imam of Al Azhar, and by other Egyptian and foreign leaders.”

Pope Tawadros said the murder of the young men was “something that is not acceptable by any religion or any person or any place, yet what happened to them is not death but they were martyrs of the faith. They kept their faith to the end.”

He called upon the community to use the season of Lent to pray “truly from our hearts” and said this should include prayer for the young men’s killers. “Prayer and fasting drive Satan away. Satan works through evil people. Many ask why God allows evil, but God gives a chance for evil doers to repent…Many evil doers repented and became saints. That is why we pray for those evil doers…We pray for those evil doers who forgot that life will one day end and thought they would last forever. We tell them: Watch out and repent before it is too late. You who are living a life of evil, violence, injustice, and terrorism. Watch out for your life and hurry to repent…”

He continued: “I am calling here on all those who do evil and violence and oppression to watch out for because you will not take anything with him to God except love.”