Hamid and Aya, a Moroccan father and daughter, show what a healthy parent-daughter relationship looks like through their SAT-7 KIDS programme Me and My Daughter. By re-enacting their real-life everyday ups and downs, they encourage viewers of the Middle East and North Africa (MENA) to strive for healthy family relationships.

In a patriarchal society, where fathers are authority figures to be respected and feared, children are rarely encouraged to ask questions or voice their opinions. Sons are often favoured above daughters, who are seldom empowered to strive for anything more than to be a good wife and mother. Hamid, a Moroccan father, and Aya his teenage daughter, offer a different example through their SAT-7 KIDS show Me and My Daughter.

Now in its third season, this inspiring programme showcases the complexities of a father-daughter relationship. Hamid and Aya re-enact their daily struggles, arguments, and conversations with each other on screen through comedy, drama, song and Bible readings.

“We are acting what we are living,” says Hamid. “We talk about clothes, studying, lying, and other such everyday topics. In our last episode we held a discussion about asking questions. In MENA society children cannot ask questions. They are only allowed to listen and obey.”

“I would like kids to learn how to be more comfortable with their fathers,” shares Aya. “I would like them to know that it’s okay to disagree sometimes; it’s normal!”

“We also encourage kids and their parents to reflect on the Bible verses we share. We don’t want our show to be only about comedy,” explains Aya.

A PROGRAMME FOR PARENTS AS WELL

Educational and impactful on several levels, the programme also indirectly models effective child-rearing approaches for parents. Viewers from across the region often communicate with Hamid and Aya via social media, sharing how the programme has impacted their families.

One viewer, a mother, posted an episode on her Facebook account saying, “Mothers be aware of what your children watch on TV that damage your efforts to raise them with good values. I recommend Me and My Daughter to all parents!” 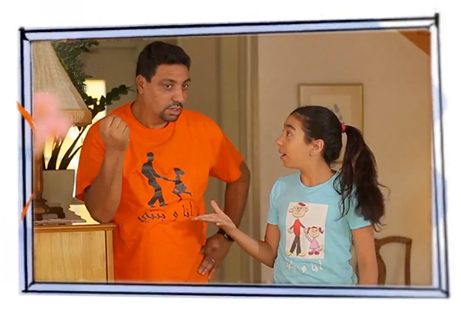