When worship programme Keep on Singing broadcast a special episode from Jordan, God used it in a very powerful way. “You have made history for Jordan,” one musician said – and SAT-7 ARABIC viewers agreed. Many shared how the programme showed a new vision of Jordanian Christian identity and encouraged them to return to the Lord.

The special show featured worship songs by the band from Karak Evangelical Church. Afterwards, band member Mawiyah Halasa was brimming with excitement about the show and the audience response.

“Words are not enough to express all I want to say,” she said. “For us, it was an unforgettable time as we found ourselves representing Jordan.”

COMING BACK TO JESUS

SAT-7 ARABIC received hundreds of comments from Keep on Singing viewers who were moved by this episode – and the church has, too.

“We have received so many calls and messages about what the Lord did through this episode,” Mawiyah shared. “And, large numbers of brothers and sisters who used to come to church called us to express their passion to return to the Lord.”

Although Jordan has been known for its relative religious freedom, in recent years, Christians in the country have been increasingly under pressure.

By reflecting the local culture and singing in the Jordanian dialect, the musicians were able to send a profound message about the legitimacy of an identity that is both Jordanian and Christian.

“The effect of this episode goes far beyond the people involved,” Mawiyah said. “It is much bigger than that. The episode included a rediscovery of Jordanian identity. This has been missing in our churches.”

AN IMPACT NEAR AND FAR

The video of the episode has been shared hundreds of times, and viewer comments came both from locals and from those further afield. One wrote:

“I want to thank SAT-7 for broadcasting this wonderful episode from my church, which I love and where I met my Lord Jesus, the saviour of my life. May the Lord bless my brothers and sisters in the church.”

Another said, “May the Lord bless you, wonderful people of Karak. Greetings from Palestine.”

Ameen, a teenage boy from Jordan, said, “SAT-7, I thank the Lord for your ministry and pray He uses you for the glory of His name. The Lord comforted us through the songs of the programme Keep on Singing and filled us with joy.”

A third simply wrote, “I request that SAT-7 rebroadcast these songs continually.” Mawiyah has also received many requests for audio recordings of the songs.

Before they played, the band introduced viewers to Karak. Once the capital of ancient Moab, the city in western Jordan is home to many historical sites. Christian missionaries arrived in this area in 1867, and the church they started there has continued to this day.

After watching the episode, one viewer shared this powerful prayer: “Karak and Amman are the oldest cities in Jordan. May the Lord set a fence of protection around them, revive all of Jordan, and protect His servants for the glory of His name.” 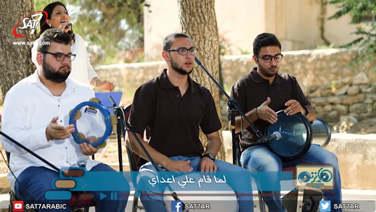