You are here: Home / Features / Lifting one voice in song
Search

Lifting one voice in song

The Middle East is home to a wealth of diverse Christian traditions. Nowhere is this more true than in Lebanon, where Christians represent 40% of the population and include Maronite, Orthodox, Melkite, Protestant and Armenian Apostolic believers.

SAT-7 celebrates this rich diversity of Christian heritage and worship, and recently filmed a series of music videos in Lebanon which aim to unite believers from different backgrounds together in praise. 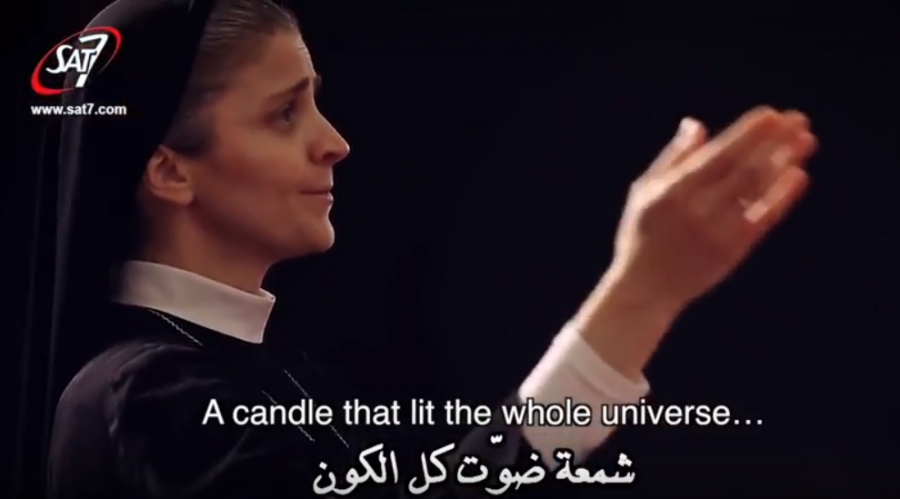 Among the musical talent filmed for SAT-7 was the Saint Rafqa Choir, one of the leading choirs in Lebanon. Headed up by a Maronite nun, Sister Marana Saad, the choir is devoted to Lebanese sacred music and aims to spread the “prayerful expression of the Word through the medium of beautiful music.”

Gamal recalled the joy of filming one of the Choir’s songs in particular, recorded on the last day of filming. It was based on Psalm 121:4: “Behold, he who keeps Israel will neither slumber nor sleep.” Although the whole team was tired, the song had a profound impact on Gamal.

“When they started singing, I felt the Spirit of God in that place,” Gamal said. “Tears came to my eyes, and I felt I did not deserve to be there to hear it.”

“We had decided to shoot five songs, but the sister wanted to do more. We recorded double that number. They were perfect – with each word, I felt the Spirit of God.”

Another song by the Rafqa choir was about Good Friday, and described Jesus as “a candle that lit the whole universe and melted alone.”

Singing with one voice

With one mind and one voice you may glorify the God and Father of our Lord Jesus Christ.” Romans 15:5

Gamal is involved in many of SAT-7’s music-based programmes, and is passionate about producing music that represents musical styles from different regions and denominations.

“There are many kinds of food. Some people like one kind, others like another,” Gamal said, explaining the need for diversity in Christian music. “So, we do not cook only one kind of food, because then some people will go hungry. Similarly, we try to create different kinds of music so that people can choose.”

By introducing viewers to music that they may not otherwise heard, SAT-7 helps promote understanding between believers of different backgrounds. “[These music videos] can promote acceptance of people’s differences and create unity,” said Gamal.

If people see and hear Jesus in the worship, Gamal said, they will see the genuine faith of people in other denominations. “Music is a universal way to talk about Jesus,” he continued. “Even viewers who cannot understand the language can relate to the emotion.”

Who are the Maronites?

“Blest are you, O faithful Church, for your refuge is the cross.” – from a Maronite Good Friday hymn

Maronite Christians originate from Mount Lebanon and its surrounding areas, and represent 21% of the Lebanese population. They are affiliated to the Roman Catholic Church, but retain their own Syriac traditions, including the use of Arabic and Aramaic in their liturgies.

In Maronite tradition, Holy Week begins on Palm Sunday with an ancient rite called Naheero, or “Coming to the Harbour”. The ship, which represents the Church, reaches the harbour of salvation in Jesus after its safe journey through Lent. Mariner symbolism is strong in the Maronite Church, due to their Syro-Phoenician seafaring heritage.