You are here: Home / Uncategorised / A VOICE FOR PRAYER, PEACE, AND PROGRESS IN LEBANON
Search

A VOICE FOR PRAYER, PEACE, AND PROGRESS IN LEBANON

As weeks of anti-government protests brought their country to a standstill, Lebanon’s church leaders joined the call for basic rights that has united Lebanese from across the country’s religious communities. Amid the crisis, SAT-7 ARABIC encouraged Lebanese viewers to pray and to be role models in working for justice and peace. 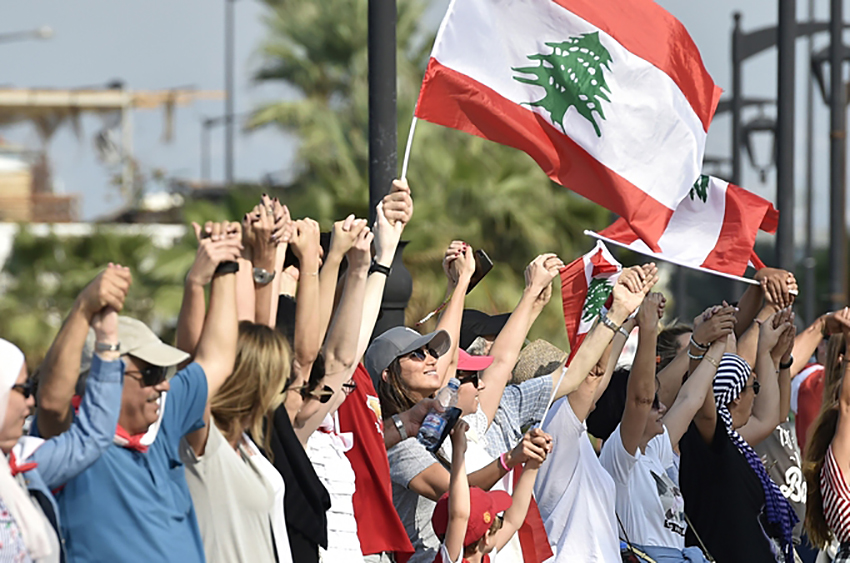 “We understand your movement and hear your cry,” the leaders of Lebanon’s Catholic, Orthodox and evangelical churches assured protestors in a statement on 23 October. “We support your demands and will not accept that your dreams be lost.” In their statement, church leaders pressed the government to respond to protestors’ demands for reform, transparency and full civic services.

The church leaders noted the remarkable unity shown by people from across Lebanon’s sectarian divisions and commented, “The people have shown themselves to be more united than their leaders, and have given ample evidence of their desire for a ‘united national life’ in a time of strife and disintegration.”

A PLATFORM FOR CHRISTIAN VOICES

On the ground, SAT-7 ARABIC covered the protests in a series of live programmes called Lebanon – Cry of a Nation, which included reports and discussion about the situation and possibilities for the future.

The programmes felt the pulse of the protests by interviewing people on the streets:

“We want people with vision and leadership capacity,” said one protester. “We want our rights,” said another. “Since I was a child, they told us to dream of a better Lebanon. Now is the time to have a better Lebanon.”

In the first episode, Dr Edgard Traboulsi, both an MP and a Baptist pastor, acknowledged that there was resistance to change and reform within parliament, but stressed the need for dialogue between people and politicians. He saw the role of the Church to be “the voice of conscience and moral direction”.  Broadcast journalist Maguy Aoun stressed that the protests were “a genuine demonstration for reform”.

“The main demands are the result of fear of poverty, fear for the future, for their children, and over lack of security,” she said, emphasising that Lebanon’s people are hoping for a better future.

In another episode, Archbishop Paul Sayah commented on sweeping economic reforms announced by the Prime Minister on 21 October. “In just 72 hours the government did what it couldn’t do in the past 30 years… It shows they’ve known all along but didn’t do anything except under pressure from the people.”

The bishop strongly endorsed the engagement of young people in peacefully calling for reform. He said they had demonstrated that unity between Christian and Muslim was possible and that dialogue among youth was “the main ingredient” for overcoming the crisis.

Following this series, the channel broadcast a special sermon, live from Resurrection Church in Beirut, on 27 October. Taking place on Reformation Sunday, the message was on believers’ responsibility to their country at this time of change.

In his sermon, Pastor Hikmat Kashouh told Christians that their first responsibility is to pray. “We pray to show that we trust in the Lord,” he said. “We pray for protection over God’s people, the protesters, the poor and needy. We pray for the will of God to be done in our country.”

He continued to add that “Christians must be role models in seeking justice and defending the powerless. They should peacefully resist when those in authority behave unethically; they should reject unfair laws and challenge corruption.”

SAT-7 ARABIC is ensuring the voice of the local Church is heard at a time when daily activities, including church attendance, have been disrupted.

AN UNCERTAIN FUTURE – A VOICE OF HOPE

Even as some of the capital’s roads have cleared, Lebanon remains in political chaos. Nevertheless, SAT-7 ARABIC viewers remain hopeful and continue to trust in God. Responding to a prayer for Lebanon on the worship program Keep on Singing, Samar shared her own stirring words.

“Only half an hour before today’s episode, my family and friends had gathered to pray for Lebanon… We read Ezekiel 34:13 – the same verse that you just read. It is the Holy Spirit that united us both in Egypt and Lebanon to pray the same thing.”

“We have no fear, for our future is in God’s hands…” she continues, “If everything seems dark now, we believe that He will shine His true light in the middle of darkness.”

At the end of her call, Samar adds her own prayer for Lebanon:

“Lord, I ask that you come and bless all the people of Lebanon,” she prays. “Bless all those on the streets or in their homes. I pray for those in authority… Come, Lord Jesus and put your peace in our hearts, so that we can love our enemies as you taught us. Teach us to love one another at this time and have tolerance for different opinions.”

What’s behind the Lebanon protests?