You are here: Home / Uncategorised / From addiction to freedom
Search

From addiction to freedom

Conditions such as depression and post-traumatic stress disorder are common in the region, where war, violence and displacement are having a devastating impact on people’s lives. Even in parts of the region that are relatively peaceful, a lack of opportunity, economic instability and societal restrictions can leave people feeling hopeless.

With no one to turn to, many people – particularly in Iran and Afghanistan – try to mask the pain with drugs, becoming addicted and spiralling into ever-deeper problems that destroy families and affect generations.

FROM ADDICTION TO FREEDOM

When Jesus encountered hurting people, he had compassion on them and offered healing without judgment.

SAT-7 is reaching out to those who are weary and burdened through television programmes that address sensitive issues. But we don’t leave it there. Our viewer support teams are always on stand-by to offer compassionate advice and prayer as well as vital follow-up support. 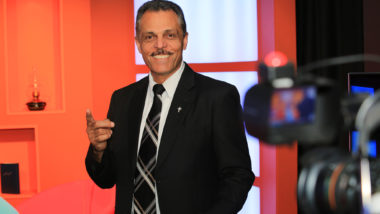 The Sound of Hope on SAT-7’s Farsi-language channel is a live programme presented by Iranian pastor Rev. Miltan Danil, who can empathise with viewers because he knows how it feels to hit rock bottom. He came from a dysfunctional home and had a troubled childhood; by the age of 17, Miltan was a heroin addict. He spent time in prison, became severely depressed and attempted suicide three times.

But Miltan’s life was turned around when his brother told him that Jesus could save him and heal him. “That was the first sentence I heard that was really full of hope,” he said.

Miltan went on to give his life to Christ and God has since used him to help others overcome similar problems. “Once you come from that terrible experience,” Miltan said, “you just want to help people.”

The Sound of Hope focuses on tackling addiction – but the teaching, prayer and support it offers attracts viewers facing all kinds of issues, including physical and mental health problems, financial difficulties and relationship breakdown.

Miltan said, “Having The Sound of Hope in live format gives us direct communication with our viewers. We want to hear from them, to know what they are experiencing today.

We need to be a voice for the voiceless, help the hopeless find hope. I want to see people put their hope in Jesus, to see them healed and set free.”

Will you help more hurting people find healing and freedom?

A gift of £50 would enable SAT-7 to reach and respond to 30 people every day for a year. Our programmes tackle an array of specific problems – from domestic abuse to post-natal depression; war zone trauma to bereavement – and our viewer support teams are available to offer a listening ear, advice and prayer.

I want to help