You are here: Home / Press Releases / ADDRESSING THE ISSUES OF A REGION IN TURMOIL
Search

ADDRESSING THE ISSUES OF A REGION IN TURMOIL

At a time of unprecedented upheaval in the Middle East and North Africa, delegates at SAT-7’s Network 2013 conference last week heard how satellite TV is helping sustain Christians in their faith and take a stronger stand in the midst of fear, persecution and diminishing freedoms. 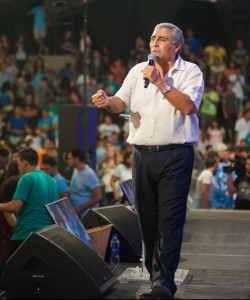 Rev Dr Sameh Maurice, Senior Pastor of Kasr El Dobara Evangelical Church, in Cairo, Egypt, was due to be the keynote speaker. But when a last minute visa problem prevented him from attending in person, the video team at Kasr El Dobara Church quickly recorded and forwarded to the conference a twenty minute video message in which he highlighted how God was at work in his own troubled country.

Since the 2011 Egyptian revolution, “People have been thinking in a new way,” he said. Comparing the situation to Hebrews 12:26-28, he said “God is shaking the people to revise their thinking. God is unmasking the truth and people are seeing the difference between light and dark.”

As a result, he shared, “God is opening the doors! God is breaking down the walls! God is calling millions to discover the truth in the face of Christ.”

In his keynote speech, Dr Terence Ascott, SAT-7’s Chief Executive, also remarked on how “people become more open to new ideas at a time of turbulence” and shared how SAT-7 “is now providing a platform for important Christian messages of reconciliation and forgiveness in the midst of violence and people’s personal pain.”

One example of this new openness came from Imed Dabbour, the Tunisian-born presenter of Forbidden, a weekly live show on SAT-7, which plays host to well-known guests from both Muslim and Christian backgrounds. The willingness of the Muslim guests to dialogue with Christians in such a public way makes it more acceptable for others to watch and hear what Christians have to contribute to the change going on in their societies. “People are looking for something new and we have a radically different message of love,” Imed said.

Reconciliation is also happening within the Church. After decades of misunderstanding and, often, mistrust between the different denominations in Egypt, Dr Ascott said a new era is beginning. For example, two weeks ago, SAT-7 staff filming the installation of a new Coptic Catholic Patriarch were stunned at the unexpected entrance of the recently appointed Coptic Orthodox Church leader, HH Pope Tawadrous. This unprecedented act of goodwill and respectful recognition of a minority Christian community by the head of the majority Church in Egypt prompted tears and wild cheers from the congregation.

In the packed three days of Network 2013, a record 160 delegates from around 20 nations heard testimonies of church growth supported by satellite broadcasts in countries ranging from Algeria to Afghanistan. The Executive Director for SAT-7’s Arabic channels, Rita Elmounayer shared how the network’s Lebanese staff were reaching out to suffering Syrians through a new live programme, Just For You – despite the historic animosity between the two countries.

SAT-7 Channel Directors also shared details of growth in the number of live programmes on the SAT-7 ARABIC, SAT-7 PLUS, SAT-7 KIDS and SAT-7 PARS channels, as well as news of increased youth programming, and of ground-breaking new shows such as the Turkish testimony show, 180 Degrees with Christ; a talk show confronting the issues faced by young Arabic women, Needle and Thread; and a new programme discipling women in Algeria.

Melih Ekener announced the March launch of SAT-7 TÜRK’s 24-hour-a-day web broadcasts and the channel’s plans to seek permission in June for a frequency on the state-owned TURKSAT satellite.

Amid the many encouragements, delegates also learned of the increasing financial challenges SAT-7 is facing. Several new strategies for income generation were presented, but Dr Terence Ascott stressed, “For four years we’ve operated with a flat budget which has been very challenging. Now if we don’t significantly increase our support we will be unable to sustain our programmes at their current levels.” SAT-7’s financial situation has been further aggravated by the recent crisis in the Cyprus banking sector (SAT-7’s International Office is based in Nicosia) where the banks are only just reopening after nearly two weeks of forced closure.

The Network event concluded with a moving worship and communion service that was lead by Ven Canon Bill Schwartz of the Anglican Church in Qatar.  This time of worship, prayer and communion was a perfect way to conclude the 3 eventful days of Network 2013.