You are here: Home / Latest News / Algeria – “You can seal our churches but not our hearts”
Search

Algeria – “You can seal our churches but not our hearts”

“You can seal our churches but you can’t seal our hearts” is the cry from Algeria as churches are being sealed shut despite Article 42 of the Algerian Constitution guaranteeing its citizens freedom to worship and the freedom to meet for a service. The 15 October closure of the largest of these – the 1,200-member Full Gospel Church of Tizi Ouzou (EPPETO) – has also halted live television broadcasts of the weekly services by Christian broadcaster SAT-7.

Pastor Salah Challah, the President of the Protestant Church of Algeria (EPA) and senior pastor of the Full Gospel congregation, has been highlighting the situation since he and leaders of two other large churches received notification that their buildings were to be closed immediately, on 15 and 16 October.

“We do not know how far this will go and what are the intentions of our authorities,” he said in a video message shared on social media. He appealed to fellow believers to “join us in prayer because the situation is critical”.

Nevertheless, Mr Challah said authorities “can seal our churches but not our hearts”. This has been demonstrated in a series of posts shared by the Algerian churches. Several show members of the Full Gospel church worshipping outside its locked doors on a staircase, while another shows protesters praying outside the 100-member Light Church (L’eglise Tafat) in Tizi Ouzou on the day it was closed. 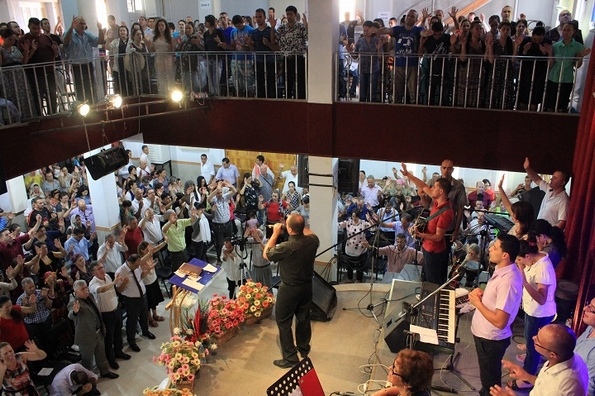 The Full Gospel church was established in 1996 and, like the other closed churches, belongs to the Protestant Church of Algeria (EPA). This association of around 45 churches was legally recognised in 2011 and was originally registered as far back as 1974.

But all of the churches have struggled to comply with an ordinance introduced in 2006 that requires non-Muslim meeting places to have prior official authorisation. Despite all applications from the Full Gospel church and other congregations, the government has yet to issue any licence for a church building. Similarly, the EPA has made repeated attempts to re-register under a 2012 Law on Associations, but these applications were ignored. Since November 2017, over a dozen of the country’s churches have been closed.

Rita El-Mounayer, International CEO of SAT-7, comments: “Since 2012, SAT-7 has been broadcasting worship services from the Full Gospel Church of Tizi Ouzou on our Arabic channel. The enthusiastic response we receive from viewers shows how much these are valued by our Algerian viewers.

“We pray that the doors of these Algerian churches will soon be unlocked and that our fellow Christians there will have the freedom to worship they enjoy so much.”

As well as broadcasting worship services in the Algerian Amazigh dialect, SAT-7 also screens a programme in which Algerian believers share their personal faith stories, a woman’s show in Amazigh, and a children’s programme, A Verse and a Story.

Some 80 per cent of SAT-7 programmes are made in the Middle East and North Africa. They are non-political and never criticise other faiths.