A SAT-7 programme for Syrian viewers has described the 22nd April kidnapping of two Syrian Bishops (Mar Gregorios Yohanna Ibrahim, The Syrian Orthodox Archbishop of Aleppo, and Metropolitan Paul Yazigi, the Greek Orthodox Archbishop in Aleppo) as the crossing of a new “red line” in Syria’s bitter two-year civil war. Some nine days after the bishops’ abduction, there has been no confirmation of their whereabouts. 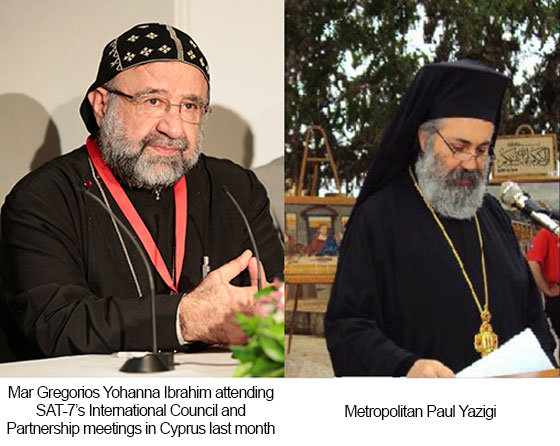 On the 23 April, news media including Reuters, AP, BBC, The Guardian and Al Jazeera quoted reports that they had been released, and we carried this information on our social media pages. Sadly this report turned out to be premature.

SAT-7 corrected this information on its social media channels but held off issuing a press release in the hope that some new information would emerge on the status of the bishops. Unfortunately, at this time of writing, there is still no news concerning their whereabouts or the identity of those holding them.

Mar Gregorios is a member of the SAT-7 International Council and, in that capacity, attended SAT-7 meetings in Cyprus last month. There he shared his concerns over the rising violence in the country and the plight of its Christian population – much of which has been internally displaced or is now counted among the more than one million Syrian refugees living across the border in Turkey, Lebanon or Jordan.

Over the past week, SAT-7 has sought to rally prayer support from its viewers through social media outlets, emails and on-screen tickertape messages on our ARABIC and PLUS Channels.  Two special live programmes were also broadcast from Lebanon discussing the kidnappings, issues of forgiveness and reconciliation – and the implication of recent events for the country.

One edition of Just For You, Syria, a live weekly magazine begun in December 2012 to support Syria’s people, traced the “red lines” that have already been crossed in a conflict that has claimed over 70,000 lives. The early “red lines” crossed related to attacks on civilians, then on women and children and then the unspeakable atrocities committed by multiple parties in the conflict. Now, the programme concluded, we have crossed the “red line” of not respecting our religious leaders.

The live shows, hosted by Syrian and Tunisian Christians, contained reports and interviews and prompted an unprecedented number of calls from viewers across the region. A Syrian journalist from Damascus shared her deep sadness at recent events but reminded Syrian Christians of their calling to love, serve and witness to everyone in the name of Jesus. Noor, one of the show’s hosts, reminded his fellow Syrians to react to violence and injustice with prayer, and not allow anger to become the driving force of our actions.

SAT-7  and the Church authorities in Syria sincerely urge the Body of Christ worldwide to continue to pray for the situation faced by all Syrians and for the immediate release of the bishops – perhaps even in time for Easter which, in the Orthodox tradition, will be celebrated this coming weekend.