You are here: Home / Latest News / Behind the scenes at the SAT-7 PARS studio
Search

Behind the scenes at the SAT-7 PARS studio

Behind an unremarkable door on a nondescript industrial estate in North London, something amazing is taking place. This is where SAT-7’s Persian-language channel, SAT-7 PARS, films and broadcasts live TV shows, which are making God’s love visible in Iran and beyond.

Alison Bird (below, seated centre), a SAT-7 supporter from Maidenhead, recently visited the SAT-7 PARS studio with a group from her church. Here, she describes her excitement at what she saw – and how inspired she is by SAT-7’s work. 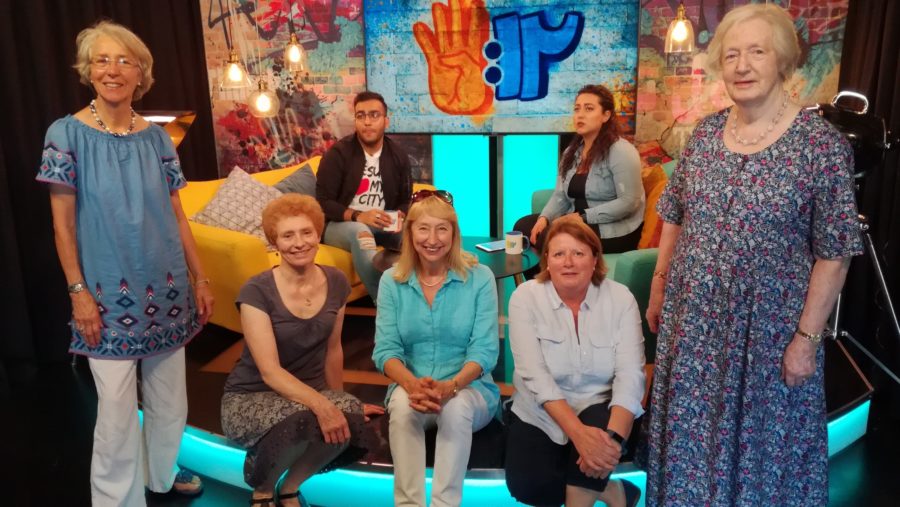 In July, five of us from St Mary’s Maidenhead went to the SAT-7 PARS television studio in London to watch their Iranian team put out a youth programme called 4:12, live on air.

It was so exciting to go into the studio and meet the two presenters of 4:12 before the show began. They were both young and enthusiastic about their work – reaching out across the world to young people, sharing the Good News of Christ and helping them with their day-to-day problems.

As the show prepared to air in Iran and elsewhere, we gathered in the operations room next to the studio and watched the technical team running the countdown: “10, 9, 8, 7, 6 … We are live!” Then the screens in front of us came alive. The two presenters were chatting happily in Farsi to the camera and to each other, and also interviewed a successful Iranian singer.

What struck me was that the programme was hardly up and running when viewers began to contact the studio with their comments and questions. A man at a screen behind us was collating all the messages coming in, and the SAT-7 team would personally respond to all of them.

This gave the programme a whole extra dimension of excitement, as those hearing the Gospel message could communicate directly with SAT-7 to find out more. They could also ask for help and advice as they sent in their problems and other questions.

SAT-7 PARS broadcasts to Persian-speakers in Iran, Afghanistan, Tajikistan and Europe. They can watch via satellite television and the internet. Support and prayer is offered via phone and messaging apps. There are a wide range of programmes such as Bible teaching, women’s, children’s and youth programmes, documentaries, worship and praise, and feature films.

It was such a privilege to be able to go behind the scenes to see SAT-7 PARS in operation. We were greeted very warmly on arrival by Dave Mann, the Support Development Executive at SAT-7 UK. He spent a long time showing us round and answering our many questions. Then we were served delicious Persian tea and biscuits by the very friendly team.

We came away even more convinced than we already were that SAT-7 is one of the most exciting things happening in the Christian world today.”

SAT-7 broadcasts not just in Persian, but also in Arabic and Turkish. It is watched by 25 million people across the MENA. It brings a message of faith, hope, love and peace to people watching from the safety of their homes. This way, it can bypass strict government censorship and reach people who might otherwise never hear the Gospel.

Here at St Mary’s, we support the work of SAT-7. We came away even more convinced than we already were that SAT-7 is one of the most exciting things happening in the Christian world today. ■