An Egyptian widow was plunged into despair by her son’s sudden death. But in her darkest moments, Jesus comforted her in the most powerful way. Sharing her story with SAT-7 ARABIC viewers, the woman revealed how God turned her sorrow and struggle to joy and fulfilment.

The brave speaker, who did not give her name, is from Zagazig, near Cairo. She shared her testimony on the programme New Eve, beginning:

“I was blessed with a daughter named Maivel, who was born with Down Syndrome. At first, I was very depressed, and I blamed God for giving me a first-born with a disability. But I still had faith in Him. He may test us, but He also gives us ways to get through.”

With God’s help, the woman learnt to accept her daughter and her disability.

“He gave me strength, and now I thank God for her every day,” she said. “She’s an angel. God gave me an angel. She’s very well behaved, and she takes good care of herself.”

Eight months after Maivel was born, her mother became pregnant with a son, Younan. Younan was a healthy child and caring for him was easy.

But later, Maivel and Younan’s mother lost her husband. At just 39 years old, she was a widow.

“The scariest part was that I had to take care of my children all by myself,” she said.

But in her time of need, Jesus drew near to her in an amazing way. “That’s when I started seeing Jesus in my dreams,” she said. “He comforted me in ways I could not have imagined. My husband’s pension was not much, but God always provided for us.”

Maivel and Younan grew up, and Younan enlisted in the army after finishing school. But when he was only 21 years old, tragedy struck once again. His mother said:

“One day he came home from the army to visit me. We stayed up until 2:00 in the morning, just talking, and then we went to bed. I tried to wake him the next morning, but he wouldn’t answer me. I called a doctor, who said that Younan had died in his sleep of a sudden heart attack.”

Naturally, this devastating loss had a spiritual impact. “I was so shocked that I rebelled against God,” said the woman. “I blamed Him and said, ‘You know how hard it was for me to get pregnant. I accepted your will when you gave me Maivel, but why did you have to take Younan too?’”

“He raised me from the dead”

Once again, God intervened in the woman’s life in a dramatic way.

“Jesus came to visit me one night in my sleep, and He took me to church. It felt like He raised me from the dead. I started going to church again, and my life began to change,” she said.

As part of this new chapter in her life, she joined a group at her church that serves members of the congregation with disabilities. “They are the real angels on earth,” she said. “This service has helped me let go of my anger and have compassion for others.”

Sharing stories such as this is an important part of SAT-7’s work to show Jesus to believers and seekers in the Middle East and North Africa. The woman ended her inspirational testimony with some words for others.

“My advice is to always have faith in God and to surrender to His will,” she said. 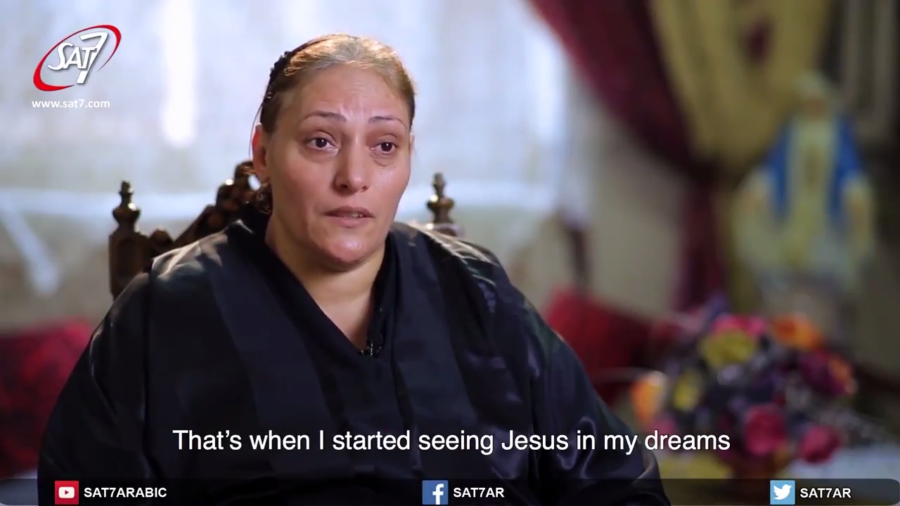