You are here: Home / Features / Bridge building through art in Alexandria
Search

Bridge building through art in Alexandria

What does it take to unify a country? Five years ago it was a national hunger for political change that brought Egyptians of diverse creeds and backgrounds together. At that time they were calling for the end of the rule of President Hosni Mubarak. But today the Arkan Cultural Centre in Alexandria is bringing young Egyptians together around a different goal – to develop their creative skills in the arts. 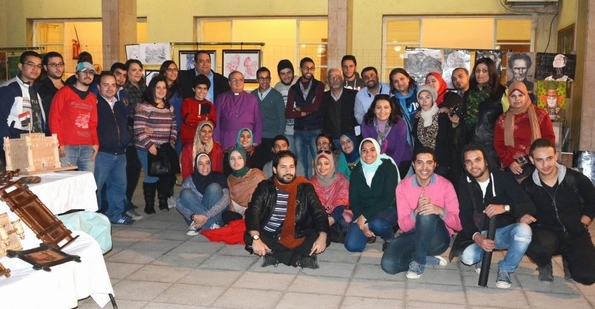 The centre’s Christian sponsors draw inspiration from the unity Egyptians experienced in 2011: “Egypt witnessed the strength and beauty of laying aside differences to reach a common goal: a better Egypt”, says a centre document.

Since 2012, the Arkan Centre has begun to see a similar strength and beauty as it draws residents of Egypt’s second city together to help build a better Egypt through use of the arts and media.

“Arkan”, in fact, means “corners”. The initiative, based at St Mark’s Pro-Cathedral, is bringing Christians and Muslims, conservative and liberal, from the far corners of Egypt’s divided society into the centre. There their lives can intersect and trust and friendship can grow.

Nader Wanis, Arkan’s founder and director, is thrilled – and not a little astonished.

Nader Wanis, Arkan’s founder and director, is thrilled – and not a little astonished. “It has attracted literally thousands of young Muslims,” he says, “without any leadership of priests or imams but with the blessings of our church leaders and Al Azhar” (Egypt’s thousand-year-old Islamic teaching centre).

The centre is run in the classrooms and grounds of St Mark’s Anglican/Episcopal Pro-Cathedral under the auspices of EpiscoCare, the development arm of the Anglican Diocese of Egypt. It is one of several initiatives set in motion in 2002 by an agreement between the Archbishop of Canterbury and the Grand Imam of Al Azhar. Another is Beit il Aila (“House of the Family”) which brings Christian and Muslim leaders together to promote religious harmony.

Arkan, on the other hand, is enhancing harmony at grassroots. It runs up to ten workshops a week and offers facilities where young adults can develop their talents, exhibit and even sell their work. And, as they find their artistic voice, perspectives and ideas are exchanged as a natural part of working together in a shared environment.

Remarkably for a Christian initiative, of the hundreds of participants each week, approximately 70 per cent are Muslim and 30 per cent are Christian. Nader, a poet, songwriter and multimedia company owner himself, says this is unprecedented.

“For over 20 years I devoted my life to creating Christian multimedia to show my Lord to the ‘other’, but in a country that only allows the distribution of Christian Media only in Christian locations that limited our communication abilities.”

Because of “the walls between us” all kinds of “wild rumours and negative ideas about Christianity and our Lord” circulated, Nader says. But through the centre, “Now literally hundreds come to our Cathedral weekly in peace, learning, having fun, showing their talents, watching Christians. Now they are the ones asking about our life, our Christianity. Love, understanding, acceptance and increasing knowledge of our faith is raised in a total peaceful and acceptable manner.”

In fact, he says, “This is the ultimate project I have ever lived … it is worth living and dying for!”

This safe space where people from different faiths can mix has also become enormously popular. “Now we are not making any more efforts to invite city youth or organisations to Arkan, they are coming to us asking how to join,” Nader adds.

On a purely creative level, it is not hard to see why. In the first year around 200 workshops trained students in disciplines that included theatre, 3D animation, writing, fine arts, singing, film making and photography.

The most successful event, Nader says, was an open festival this year entitled Art Without Walls.Rooms and courtyards were hung with artwork by over 120 Arkan artists in an event which drew around 400 visitors including The American and UK Consuls, United Nation representatives and college professors. But more importantly for Arkan, ordinary Alexandria residents from different faiths and who had never had the opportunity to create or appreciate art before came to enjoy the fruits of the students’ work.

Nader believes the centre is also satisfying a spiritual curiosity. “Many Muslim youth are tired of the hatred that has been fed to them,” he says. “Through foreign TV and internet channels they see the Christian world, but have never been in touch with the Christian community. Arkan gives them that chance that they long for.”

It is clear that in its first three years the Arkan Centre has had a big impact. What does Nader hope and pray for in the future?

“Egypt now needs more education in the media sectors, in TV Production, short movies production, documentaries production, digital art and journalism,” he replies. “Pray that Arkan can become the first Media School in the Nile Delta area. The Cathedral can provide us with a huge space to build the ‘Arkan Visual Art School’ but we need infrastructure and equipment and salaries for the main staff for the first two years at least until it can become self-sustaining.”

Receive the monthly Briefing and alerts to more encouraging stories of what God is doing amid the troubles of the Middle East.