A turbulent year ended and a new one began with a sharp escalation of tensions between Saudi Arabia and its chief rival, Iran. This month’s briefing looks at the year ahead.

The year ahead for the region 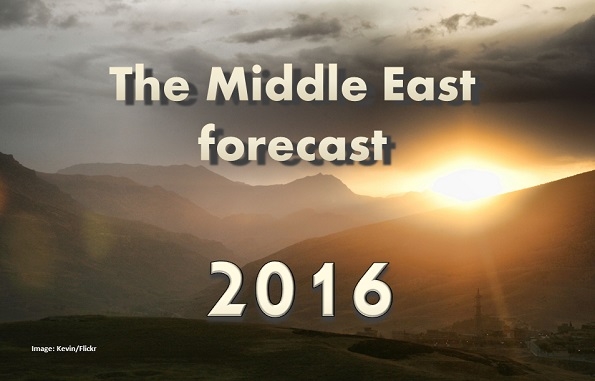 The New Year began at full speed. The execution of Nimr al-Nimr, a leading Shiite cleric in Saudi Arabia, prompted international condemnation with the fiercest reactions coming from Iran. Ayatollah Khamenei warned Saudi officials they will face “divine” revenge while protestors in Tehran stormed and set fire to the Saudi Embassy. Once again, the fault line in Iranian politics was exposed between those seeking a neutral relationship with the wider world and those who see confrontation as imperative for Iran’s domestic and regional interests.

There is little doubt that this deepening clash between Saudi Arabia and Iran will be an important factor in the year ahead. The new Saudi king is far more assertive and proactive in regional affairs than his predecessor. Both countries will want to maintain their client and ally relations in the region. Tensions between the two will play a key role in ongoing conflicts including the proxy wars in Yemen and Syria.

A key feature of the year will also be the conflict between Turkey and Kurdish militants. The collapse of the peace process with the PKK has brought a resurgence of violence and heavy-handed government crackdowns. Together, these claimed hundreds of lives, civilian casualties and thousands were forced from their homes. Turkey is now more determined to prevent the advance of Kurdish groups in Syria that are related to the PKK. Although the country is on good terms with the Kurds of Iraq, PKK bases there could unsettle this.

The return of assertive Russian involvement in the region will be another feature of 2016. Turkey and Russia start the year continuing their stand-off after the downing of a Russian jet that entered Turkish airspace. Russia has begun reaching out to the PKK and has attacked Turkish-backed groups in Syria. Turkey responded by making positive overtures towards Israel, stressing the importance of good relations, and began to build bridges with Saudi Arabia. This fresh reshaping of alliances in the region will play a major role on a wide range of issues from dealing with so-called Islamic State (IS) to deciding the future of Syria.

Egypt remains the wild card, as it finds itself at odds with most of the regional power blocs while still receiving substantial financial support to float an economy that is always on the brink. The country faces serious terror threats in its Sinai region and tourist destinations. The UK’s suspension of flights to the Red Sea resort of Sharm Al Sheikh is causing losses of millions of pounds a month.

Yemen and Libya will continue to be chaotic failed states, with rival groups controlling different areas. A recent diplomatic initiative led Libya’s two competing parliaments to sign a deal to form a new unified government. The UN described this as a “ray of hope”, although there remains the problem of IS which currently has control of the city of Sirte. Both Libya and Yemen face acute humanitarian crises, with desperate food, water and electricity shortages, and air strikes taking a high toll on Yemeni civilians. They join Syria as the main sources of the region’s refugee crisis. Over the last 12 months, more than 1 million refugees arrived in the European Union, where politicians remain divided and been in disarray on how to respond.

In North Africa, Tunisia and Algeria will see political changes and continue to have terrorism concerns. However, both are enjoying relative stability in the state and political structures. Sadly, 2016 will continue to see high terror risks across Europe, linked to developments in the Middle East. They are a constant reminder of how interconnected our world is, and how we do not have the luxury of burying our heads in the sand over conflicts in the Middle East.

The year ahead for the Church

It has been impressive to see the faith and commitment of many of the region’s Christians over Christmas and the New Year, but 2016 is set to remain challenging.

First of all, thousands of Christians from Syria and Iraq are on the move seeking a safe haven either elsewhere in the region or in Armenia, Europe, and North America. While some are seeking to join family, many risk being left in limbo and surviving on whatever personal funds they have. Their movements – and how Christians in host countries treat them – will have tremendous implications for the Church in the Middle East and in receiving countries.

There is now a growing awareness of the persecution of Christians. In fact, many Western leaders made this point in their Christmas statements this year. Not all – such as the discrimination against non-Christian refugees some have voiced – is positive, or leads to concrete action. Pray for effective practical aid and sensitive dialogue that will support Christians threatened or displaced in the region and positively impact how Middle East states and citizens see their Christian populations.

As yet, there is no end in sight for the conflict in Syria. This will continue to bring hardship and risk to Christians living in regime-controlled areas, and outright religious cleansing in areas controlled by so-called Islamic State and other extremist groups, or serious personal risks in areas controlled by mini-war lords who are after their properties and belongings.

Video clip: SAT-7 PARS interviews young Iranian asylum seeker about the pressure to hide your faith or be expelled from school, university or lose your job

In Iran, despite President Rouhani’s pledges in 2013 that “all religions, even religious minorities, must feel justice”, the country continues its persecution of Christians. Hot on the heels of the welcome release of Farshid Fathi, a pastor arrested in 2010, ten members of house churches were detained in Shiraz and Isfahan in the days before Christmas. Behind the contradiction between pledges and reality lies a fierce domestic struggle: on the one hand, those who wish to open up to the world and on the other, the ruling regime and its supporters, determined to maintain Iran’s unique version of an authoritarian Islamic state.

In Turkey, Christians have a complex year ahead. On some levels they are enjoying more freedoms than before, but the political chaos in the country has left them more vulnerable: death threats sent to churches by extremists thought to be linked to IS have been worrying. A small number of Christians in Turkey’s South East have also been caught in conflicts between Turkish armed forces and the PKK.

In Egypt, Christians, by and large, still enjoy a good relationship with the Al-Sisi government, though their support for it causes Islamists to scapegoat them. Sadly, the well-known dynamic where such groups attack vulnerable Copts, particularly in Upper Egypt, is set to continue.

In Lebanon, the seat of the President remains vacant after 19 months. The constitution requires the holder to be a Christian, but the latest efforts to find a candidate that all the parliamentary groups would accept seems to have failed. Many Christians see this as a denial of Lebanon’s Christian presence (39 per cent), though they enjoy exceptional freedom in day-to-day livfe and witness. Regional political developments, particularly the tensions between Sunni and Shia groups over Syria and Saudi-Iranian relations will continue to affect Lebanon and the strength of the Christian voice in parliament.