A Christian choir asked to perform at an inter-governmental meeting in Sudan in order to promote peace and goodwill have appeared on SAT-7 ARABIC for the second time.

Viewers of the first appearance by Sudan’s Candlelight choir deluged the channel with enthusiastic comments, delighted by the multiracial choir’s lilting praises.

Keep on Singing producer Andrew Gamal therefore had no hesitation in inviting them back to film a live episode of the programme and some special songs for Christmas. Andrew explained how Keep on Singing seeks to showcase different genres of Christian worship from across the Arab world and North Africa. This has the twin benefit of encouraging SAT-7’s widespread, multicultural audience and strengthening their unity in Christ.

The Candlelight choir is a perfect example of unity in diversity. Although there are many Christian choirs in Sudan, they believe they are the only choir with members drawn from Orthodox, Evangelical and Catholic churches. They are also multiracial, composed of African and Arab (Egyptian-Sudanese) members. Their repertoire includes varied music styles and songs from across the region and they write their own lyrics in the Juba Arabic of South Sudan. “We wanted something that belongs to our culture and reality,” Candlelight leader, Samar Boules, explained.

An architect by day, Samar was one of four original members of the choir. It began ten years ago, after she travelled to Australia and witnessed the festive atmosphere and singing of Christmas carols there. “In Sudan there is no joy or celebration [at Christmas] outside church walls,”, she said. Keen to change that, she and some friends prepared for their first concert. It was while distributing fliyers advertising “carols by candlelight” that the choir got its name. The wording led people to think that the choir itself was called “Candlelight” – and it stuck.

Candlelight are in high demand for Christmas and Easter concerts, for weddings, and even at national events. One of these was an important meeting of Egyptian, Ethiopian and Sudanese government representatives in Sudan. They came to discuss a controversial dam construction project that will control water supplies to the three countries. Samar explained that Candlelight was invited to perform “as part of the Sudanese role to keep peace between the conflicting parties”.

Their ability to promote harmony comes not only from the music, but their unity in Christ. “I like the diversity,” said choir member, Angi Ayoub.

We learn a lot from each other and support one another. We learn to love the Lord and praise Him without prejudice towards others.” 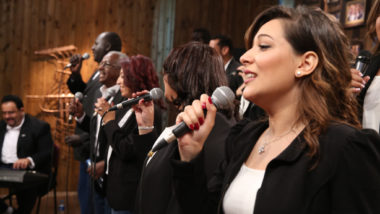