You are here: Home / Features / Christ of the Abyss and drowning asylum seekers
Search

Christ of the Abyss and drowning asylum seekers

In ignoring thousands of migrants who risk drowning at sea, are UK Christians also refusing Christ? A Middle Eastern Christian asks the question. 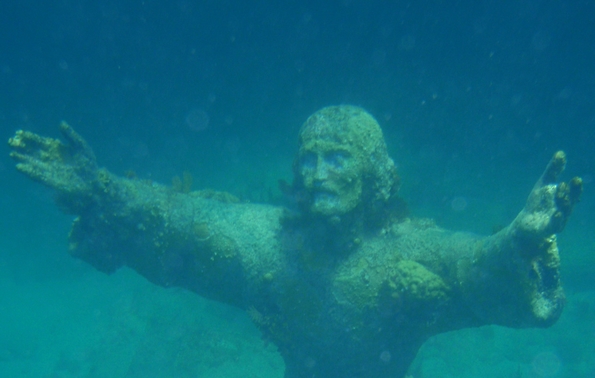 There is a strange and powerful image that has often come to mind in the last 12 months. It is of a submerged bronze statue of Christ – His barnacle-encrusted hands upraised in blessing – in the blue waters of the Mediterranean off the coast of Italy. Similar sculptures have also appeared as underwater art installations at other locations.

What has brought this figure of a drowned Christ to mind has been the thousands of people dying in the beautiful waters of the Mediterranean as they have dared to find a way to cross to Europe from Africa and Middle East.

For those of us in the UK and mainland Europe, the language used to describe these fugitives was, first, “illegal migrants”, and then, as we learnt that this phrase was wrong, simply “migrants”.

Yet, the UN refugee agency has continually said that most of the people risking the life-threatening journey across these waters are fleeing from conflict zones, with substantial numbers being from Syria, Eritrea, Libya and Afghanistan.

In other words, they are asylum seekers – people running for their lives. Yet, our media and populist politicians have distorted perceptions so effectively that now many Christians, too, seem to share the belief that many asylum seekers are simply lying about their experiences, and that tough measures should be taken to stem the numbers of people trying to reach Europe.

Sadly, it was that public call that led the EU to suspend its search and rescue missions in the Mediterranean in November 2014, resulting in thousands of deaths over the last year. This included an incident in April, when a fishing boat carrying around 800 people sank off the coast of Libya in what the UN called the “deadliest incident in the Mediterranean ever recorded”. After widespread international condemnation, Operation Triton, a limited search and rescue operation began, resulting in less than 100 deaths over the following two months.

Another tragic sinking off Libya this month, was almost a replay of the April incident, as 400 people were rescued from a capsizing vessel carrying 600 passengers.

Each of these reports reminds me of the Christ of Abyss – Christ with his arms open, embracing those long-suffering human beings into his eternal rest.

Without a doubt, there have to be border regulations, controls on migration, and robust assessment of asylum cases. But in contrast to public perceptions, the UK’s annual number of refugee admissions is at a shameful level. In the five years of the Syria war, the UK only welcomed around 150 refugees from that country. This contrasts with countries in the region which are hosting millions of Syrians and other European states which are accepting tens of thousands.

The question that should haunt us as Christians in the UK is profoundly challenging: what does the Gospel of the Christ of the Abyss say about this situation? What does it mean for the British church?

When one reads Matthew 25:31-46, the parable of the sheep and goats shakes us to the bones. Christ says those who do not embrace and welcome those in need and in suffering are refusing Jesus himself even though they might be calling him their Lord. From the mandate to love our neighbour as we love ourselves to the parable of the Good Samaritan, taking care of people in crisis is at the core of the Gospel.

How Christians can be Gospel-driven voices and actors in a world burdened by wars and mass population moves is challenging indeed. But surely for British Christians this means that the Church should be speaking out against the demonisation of asylum seekers in the media and politics. While recognising the need for immigration controls, the Church can ask the UK to at least admit the same rate of refugees per head of population as EU partners, such as Germany and France, are doing. Christians can also actively assist refugees who make it to the UK and assure the government that they do not simply demand other people respond to suffering, but are doing it themselves. This requires a radical shaking off of short-sighted political attitudes in the UK, and focusing on Christ, His life and His Gospel.

Christ is at the bottom of the ocean, embracing those poor human beings who drown. By not being there with Him, we fail both Christ and those we are called to love, but also the Gospel message itself.

Some 2,000 migrants have drowned in the Mediterranean in the first half of 2015. Germany, which receives the most asylum applications in the EU, is expecting 800,000 refugees to arrive this year. (BBC, 19 August 2015)

Send any thoughts you have on this article to editor@wazala.org Responses may be published on this page.