Celebrating Christmas is difficult for many Christian children who live in the predominantly non-Christian countries of the Middle East and North Africa. Especially so in countries such as Iran, Afghanistan and Algeria, where believers are facing increased pressure at this time. For children and adults alike SAT-7’s Christmas schedules this month offer them the transforming message of “God with us” as they share the message of a Saviour’s birth.

“Iran is currently going through extremely difficult times that are painful for everyone,” says Parastoo Poortaheri, presenter and producer of SAT-7 PARS’ live children’s programme Hashtag. 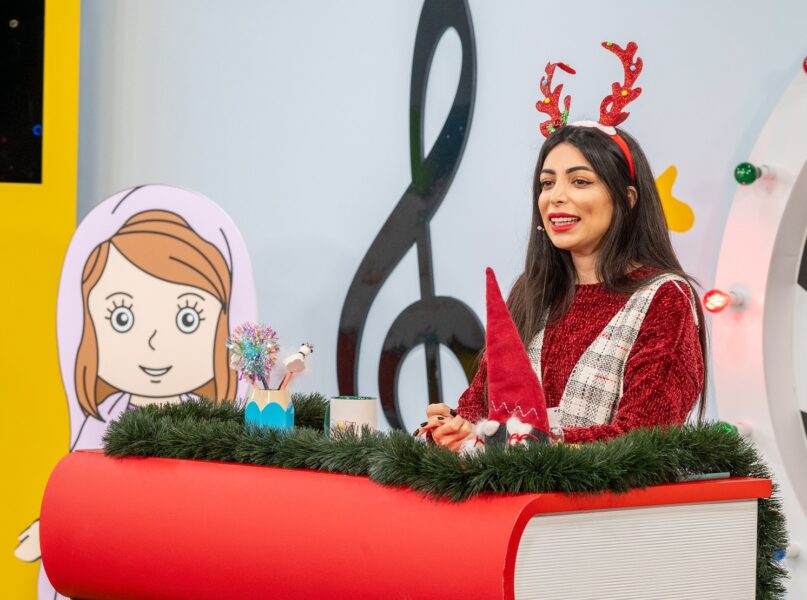 Throughout the last three months of protest and government crackdowns, children in Iran have been calling in or sending messages to SAT-7 PARS’ live programmes Hashtag, Golpand, and Church4Kids. They are sharing their prayers for Iran and encouraging and supporting one another. Siamak, an Iranian boy in Türkiye, recently prayed, “Oh God, save the people of Iran – save them in any way that is possible. Save them from the sins and wrongs of others and protect them in the name of Jesus.”

Over Christmas SAT-7 PARS will have two special episodes of each of its live children’s programmes. “We will emphasise the importance of Christmas, especially God’s message of love and peace. During these episodes, we will also talk about our goals and new beginnings,” Parastoo says. “We want to stand with these children, to pray with them, comfort them, and bring joy into their lives through Christ’s message of love and hope.”

SAT-7 KIDS, the network’s Arabic language children’s channel, marks its 15th birthday this month with a feast of Christmas programmes. These include Christmas Story from Algeria, a drama in which children visit their grandmother who tells them the real story of Christmas – Jesus, God’s gift, who came to save the world. This programme in Kabyle dialect will be especially meaningful to Algerian Christians, most of whose Evangelical churches have been forcibly closed since autumn 2019.

SAT-7 KIDS’ birthday celebrations will also see the launch of a campaign called Tomorrow is Yours. This will feature live and special pre-recorded episodes reflecting the fact that tomorrow belongs to all the children and the young people of the MENA, who are the future of all the Arab countries.

Counting down in Türkiye

SAT-7 TÜRK programmes are counting down to Christmas, too. “Turkish children wait for this holiday with more excitement and joy than anyone else,” says Gülsüm I., Deputy Executive Director of SAT-7 TÜRK. “From 1 December, we are bringing to SAT-7 TÜRK screens the surprises we have prepared for children in our live children’s programme, Mini City.”

In one episode, Nora Yazırlıoğlu, the program host, tells her young viewers why praying during December is important. “Praying prepares us for Christmas and the birth of baby Jesus,” she says. In another episode, children learn how to design a paper Christmas tree if their parents cannot afford to buy one.

SAT-7 is also be offering an abundance of inspiring festive content for adults. This includes live worship from an array of churches in Lebanon and Egypt, Christmas Eve communion services on the Western and Eastern dates (24 December and 6 January) recorded concerts ranging from Bach to modern Arabic language worship and even special drama.

One of the highlights on the ARABIC channel is Breakthrough, a retelling of the Nativity story filmed entirely with a local cast in Upper Egypt in the local Saidi Arabic dialect. Samuel Farouk, a a renowned worship leader from the region, walks viewers through the drama performing songs that are sure to communicate powerfully with believers in the agricultural villages of Upper Egypt.

More high quality music will be offered in concerts from Zamalek in Egypt’s Giza province with singer Maher Fayez, another from Ava Makary Church in Assuit, Egypt, and, from the town of Jesus’ birth,the  Joy of Christmas from Bethlehem. The TÜRK channel meanwhile showcases nine new, jazz-tinged recordings of well-known Christmas carols.

Over the Western and Eastern Christmas period, specially recorded devotional programmes will help viewers across the MENA region to reflect on their own personal relationship with Jesus whatever the events and pressures around them.

Across all of these festive programmes, the message of God’s commitment and saving love for His world will enable viewers, young and old, to approach the new year with renewed faith and confidence.