Syrian children – internally displaced by war – voiced their hopes and their faith in God in a special SAT-7 Easter programme from Damascus on Maunday Thursday (24 March).

A commissioned TV crew followed some 300 children from different religious backgrounds as they participated in a fun-packed day of activities, learning and Easter praise at the Jesus Light of the World Church.

Seeds of hope to rescue childhood

The event entitled “Give us our childhood … Give us peace” showed how members of this Damascus Evangelical church are planting seeds of hope and love in children who have known the constant horrors and confinement of war.

A young boy named Efteemos said, “I lost many things that other children have. I have lost my childhood such as being able to play and learn and live in safety. We came from Aleppo to find security here.”

Christian and non-Christian children joined in singing songs of praise to God for keeping them safe. Sunday School leaders acted out a play dramatising and explaining the Easter events for the children. 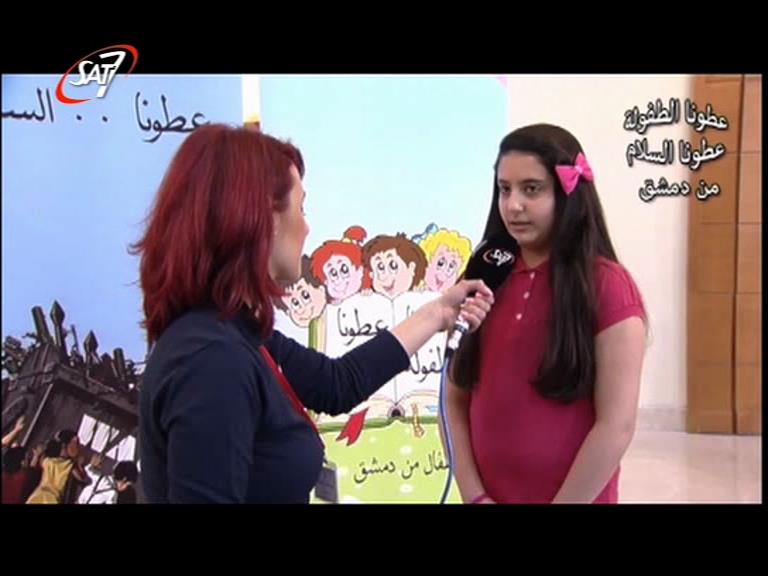 After this, the kids plunged enthusiastically into a full day of activities, games, arts and craft and face painting. At the end of the day, leaders dressed as clowns gave the children Easter gifts and everyone gathered for a festive meal in the church hall.

Many , like young committed Christian Laurice (pictured), had looked forward to the day for weeks. Despite bombings and school exams, she had pledged to attend choir rehearsals before the day “because we want to tell other children that they shouldn’t fear because Jesus is with us.”

SAT-7 ARABIC Programming Manager, George Makeen, said the event, organised with local NGO A Better Life for Syrian Kids, is part of a series of initiatives designed to give moral support to children displaced by the country’s civil war.

“It is important to remind kids that they still have a voice, that their hopes and dreams can be fulfilled. Together we wish to show the world that the Christian church in the Middle East and North Africa perseveres in the face of conflict,” Makeen explained.

One poignant way in which the children expressed their experiences came in the art workshops. Tony (pictured) drew himself and his sister camping on either side of a cross after a long journey in a forest, saying , “Don’t be afraid because Jesus is with you whether you are inside the church or not.”

Another young boy simply drew a candle. He said he wished God would shed His light on Syria and protect it because there is no electricity in Syria.