Egypt had a Christian majority for several centuries, and its capital is home to many churches that illustrate the country’s rich Christian history. SAT-7 ARABIC is producing a new documentary, Christians of the East, that will bring this fascinating, little-known past to life by telling the stories of Cairo’s churches.

Each episode introduces a new congregation, interviews its leader, and explains the church’s history, traditions, and architecture. The programme aims to inform and empower Egyptian Christians by showing them their own faith’s history in their homeland.

Director Nashwa Louis shared that even she has found the show’s content to be a revelation.

“The programme shows Christians their history – not in words, but with images,” she said. “Our viewers need to know that we have a strong, rich heritage. When we are introduced to different churches and leaders, we feel the true value of our history, and this increases our confidence.”

The team hopes that the historical background will also be revelatory for viewers from other faiths who may be unaware of their nation’s Christian past. “We are speaking to all viewers, not just Christians,” Louis said. “The word ‘Copt’ [now used to refer to Coptic Christians] originally meant ‘Egyptian’. We want to inspire people to search out their history.”

The Christians of the East series illuminates Egypt’s history as a place of refuge, including for Armenians, Syrians, and Palestinians. Along with migrants from Greek, Italian, German, and French backgrounds, these communities brought colourful variety to Egyptian culture. The churches they built stand as a physical reminder of this history.

One episode focused on the Church of St Gregory the Illuminator, an Armenian Orthodox church completed in 1928. Deacon Raffy Boghossian told SAT-7:

“The first thing that Armenians do when they arrive in a country is to play a cultural role. We build a school and a church to keep our identity intact – this is most important to us. An architect came from France to build this church, on the condition that its design would be similar to churches in Armenia so that Armenians would feel at home.”

“A PIECE OF HEAVEN”

The episode featured Archimandrite Gabriel Sarkisyan, Deputy Bishop of the Diocese of the Armenian Apostolic Church in Egypt. He explained that the church’s central dome, which comes into view when a praying worshipper lifts their head, symbolises finding God.

Even as the number of Armenians in Egypt has declined to as few as 6,000, from a peak population some estimates put at 50,000, the church has continued to hold Sunday services and daily morning prayers.

“Our spiritual fathers regarded the church as a piece of heaven on earth. Prayer is important anytime and anywhere, but especially in church, because it is the house of the Lord,” said the Deputy Bishop.

It isn’t only Egypt that has a surprisingly rich Christian legacy. The Christians of the East team plan to produce further documentaries to highlight the Christian heritage of Iraq and other countries in the region, where Christianity had, until recent years, flourished for centuries. 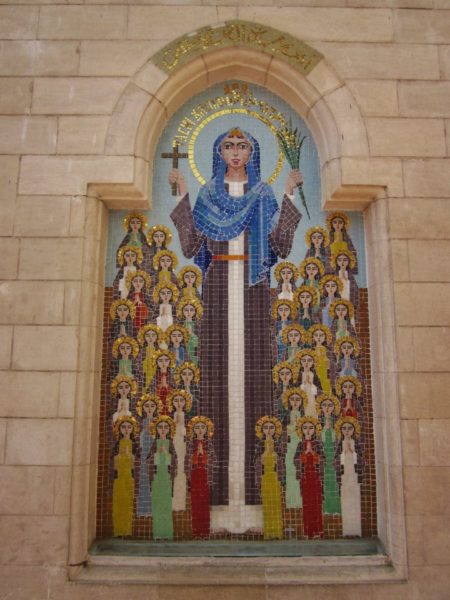