You are here: Home / Press Releases / Faith rises from the rubble of old Homs, Syria in SAT-7 Christmas broadcast
Search

Faith rises from the rubble of old Homs, Syria in SAT-7 Christmas broadcast

In one bomb-struck church a manger and Christmas tree are dug out from the rubble. In another, where only the walls remain standing, weddings and communion are being held under an open sky.

A SAT-7 Christmas broadcast from the battered Christian quarter of Old Homs in Syria has shown revealed a community starting to get back on its feet after a two-year siege. In Al-Hamidiya, small shoots of faith among weary but hopeful clergy and local and returning Christians are pushing up through the ruins.

Al-Hamidiya was one of the many Old City districts of the city returned to Syrian government control in May 2014. Meanwhile, the last rebel-held area of the city was surrendered only on 9 December 2015.

The programme shown on SAT-7’s Arabic channel combined interviews with leaders of the community’s diverse congregations with a united Christmas morning celebration. All spoke of a common goal: to share the joy and hope of Christ’s coming to us with people who have suffered terribly, and to invite those who have fled to return and reinhabit the city again.

Bent iron construction rods show through holes ripped in the bomb-blasted walls and ceiling of Our Lady Melkite Greek Catholic Church. But despite the damage, Fr Abdallah Kamaz insisted the congregation dig out the Christmas tree and the manger from beneath the rubble and decorate the tree.

He said most of the damage had been caused by a rebel bomb which exploded two days after opposition fighters had left the city. It killed one person and seriously injured four others. 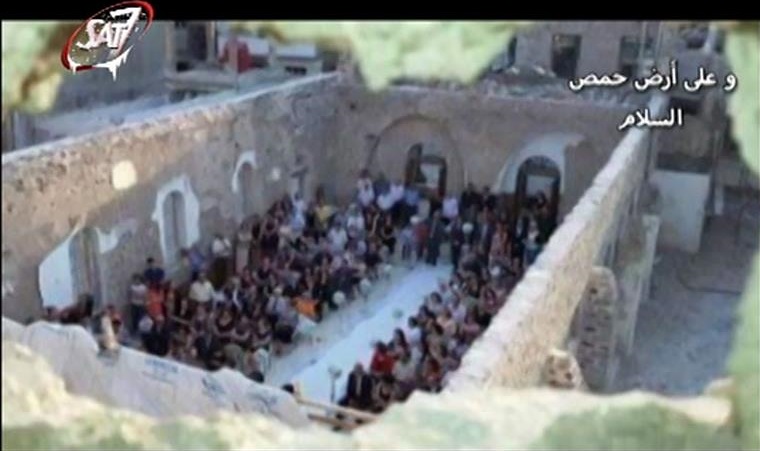 Nevertheless, “We insist despite the hurt and pain and ruin that we return to our Archbishopric and rebuild it,” Fr Kamaz said. “We insist on sending out a message that from under the rubble we are coming out to be born again with Jesus Christ. We want to relive the birth of Jesus Christ especially in this area that has seen too many dead.”

Fr Jihad Nassif, Head of the Maronite Church in Homs, told SAT-7 he had come to live in Al-Hamidiya “to plant hope in people’s hearts”. He said, “Christmas is for everyone, but it is specifically for those who lost their loved ones, the kidnapped ones, the lonely ones, the sad, and the displaced”.

The process of rebuilding a city is not an easy task, he said. “We face many financial challenges. We try to fulfil some needs like clothing and food but the church doesn’t have the provisions to build all the houses here.  But there are people who are helping with some painting or building or electricity.”

Fr Michel Naaman, Priest of the Syrian Catholic Archbishopric , said four schools have reopened, giving 1,500 to 2,000 children a vital opportunity to carry on their education. 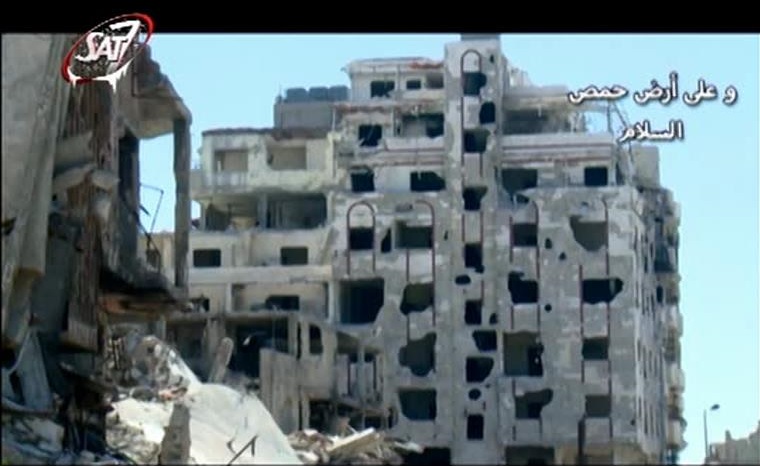 One of the worst-hit churches in the district is that being cared for by Deacon Silwan Sneige of St George Greek Orthodox Archdiocese. The heavily damaged church has no roof but still it holds mass and celebrations such as marriages, he said.

“My message to the world is that we must believe that the last word is not for the evil but for the good,” stressed Fr Kamaz. “The birth of Jesus Christ brings hope and peace to the earth. We must pray to Him to have them in our country and our lives.”

This was also the clear message of the televised Christmas morning celebration, themed on Jesus’ promised gift of peace (John 14:27) and in which Evangelical, Catholic and Orthodox leaders all took part.

In his introduction to the service Fr Nassif told worshippers, “We are all running to seek safety and security in the world,   but Jesus says He will give us the peace… When we forget Jesus’ words we fall into despair as we see the current events.”

Images: two views of St George’s Orthodox Archdiocese church where services take place under the sky, and skeletons of war-damaged buildings in Homs