As you listen to Fatma* tell the story of why she, her husband, Ibrahim* and their three girls became five of Lebanon’s one million Syrian refugees – you start to understand why so many have taken the ultimate step of leaving their home country. 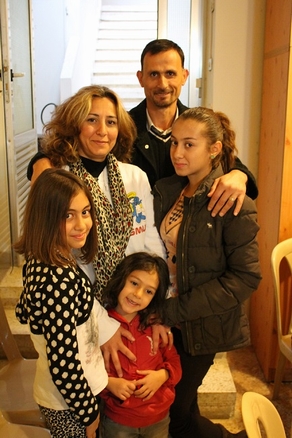 The chaos and violence have made life in their home country impossible and they feared especially for the safety of their three girls, Mariam, Aziza and Iman*. But they are unusual in that this family, brought up in the majority faith, also turned to Christ and are fleeing religious persecution from their relatives.

This took them initially to Lebanon’s Bekaa Valley, and later, to another part of the country, where they cannot be threatened by family members and the girls are not required to be taught in the faith they used to hold.

It is Fatma who tells the family’s story because Ibrahim experienced the country’s arbitrary violence long before the present conflict. He was mistakenly arrested and tortured and can now barely speak – his vocal chords were so severely damaged.

It was over 13 years ago that the family began the spiritual journey that took them from their home country.

We were raised to know that Christians and the Christian religion are not good,”

“Ibrahim’s brother came to Lebanon and came to believe in Jesus through meeting Christians here,” Fatma explains. But Fatma wore the veil and was committed to her religion. “We were raised to know that Christians and the Christian religion are not good,” she says.

When Ibrahim and Fatma married, they moved in to live with Ibrahim’s family, but his brother’s excitement about Christ angered her. “He was always telling us about the love of Christ for us. He told us there is a Christ who will save you and give you eternal life. We asked ‘Why do we need Jesus when have our own beliefs?’

Not wanting this pressure, Fatma told her husband “I don’t want to live with my in-laws any more” and they left the house.

After this, Ibrahim inherited some money, bought a car and started work as a taxi driver. But there was a problem: “The car was always breaking down. It was a piece of junk and we couldn’t sell it,” Fatma says. “Ibrahim’s brother told us to pray and ask the Lord: he will listen to you. She said OK, I don’t believe but let’s ask. The second day after our request the car was sold. We said it seems there is a God and he can hear us: is it possible? This was our first prayer and Jesus answered it.”

Fatma describes this time as “a period when we were not following our former religion and we were not Christians. It was a doubting period. It was not easy to live all your life as one thing and then decide to become a Christian,” she says.

To take a step as big as this, she says they needed God’s help. “We said, ‘Please, Lord, if you are the God we read about, that everybody is telling us about, please show yourself – any sign, any sign.”

The sign came in the form of a dream: “I saw a hand holding my hand and saying ‘Come with me’. This hand was leading me and pointing to a Bible and said ‘You will find the truth here’. So the couple started going to a church and “reading more and believing more”.

We were not 100 per cent Christians. I don’t think we were strong enough”

As time went on Fatma says she started wearing a smaller and smaller veil – slowly pushing it back a bit more, she chuckles. “We were going to the church but we were not 100 per cent Christians. I don’t think we were strong enough and we didn’t know a lot of things.”

Then came the crunch point. “One day a man from our family came and asked us why are you praying to Jesus, why are you believing Christianity? We were at a family gathering.”

Ibrahim, who had already taken this step stood up and said “Yes, I am a Christian,” and walked out of the room.

“They told us, ‘Go away, we don’t want you any more’. They all looked at me waiting to see what I would do. I thought if I stayed I would have a very difficult time convincing them I am a Christian too. I stood up, took off my veil and followed my husband.

She continues: “This was a step that made us stronger but still we had some weaknesses. But as time went on, we still had difficulties with the family: we were not accepted.”

Like many who have trodden this lonely path away from their own community, a time came when Fatma questioned her decision. “At one point I had doubts: had I done the right thing? I didn’t want to be isolated, to be different from other people.

“I asked God: ‘If you are there, please will you send rain tomorrow’. It was August when it doesn’t rain, and the next day was a bright morning. Then in the evening Ibrahim came in and said ‘Do you know what’s happening outside?’ I said ‘Is there trouble?’ ‘No,’ he said, ‘it’s raining’.

“This was amazing,” Fatma smiles. “God had sent rain on the whole land just for me. I knew then if God could do this for me, he must love me very much. From that we gained real strength and power, and I thought we will never leave God.”

*All names changed for security