You are here: Home / Blogs from the Middle East / Egypt Blog / Festivals galvanise ministry to region in despair – November 2014
Search

Cairo-born and based, Kuwait-raised Nancy is a qualified Christian psychologist working with a Christian ministry which supports families across the Middle East.

Nancy writes: “I’m glad to begin blogging on this SAT-7 website, since I firmly believe in the ministry’s vision to minister to Christians throughout the Middle East and North Africa. The Lord graciously led me to Him when I was 13. My life has been forever changed by His amazing grace.”

“Jesus… Jesus… Jesus…” the song that was born at the historic prayer night on September 11, 2011 has become the theme song of any large Christian event in the country. The two largest annual Christian events were held in October this year. Thousands of Christians throughout Egypt anxiously anticipated attending Count it Right and Onething. These are two massive church events hosted by Kasr El Dobara Evangelical Church (KDEC). 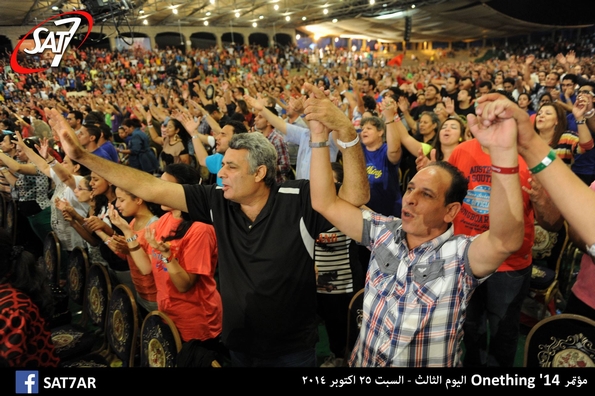 “Your decision is your choice”. That was the slogan of this year’s Count it Right, an annual Christian mega-event hosted by KDEC. This “festival” as it is called, seeks to minister to those from either non-Christian backgrounds or nominal Christians who aren’t really living out their faith.

It certainly is a festival! KDEC invites teams who perform all types of stunts from motorbike and skateboard shows to power stunts and even an illusionist. All the teams are Christians who perform their shows to minister to people and share the salvation message. The teams are positioned in stations and people rotate freely through the stations to view the shows.

Count it Right added three new stations or “tents” this year, one that addresses the sexual harassment/abuse of children, one that addresses atheism, and a third for marital counseling. The largest “tent” or stadium, hosted praise and worship teams, and popular worship leaders, Ziad Shehada (from Jordan) and Maher Fayez (from Egypt), along with an evening sermon and salvation message.

Families of all ages, but particularly youth, filled the Beit El Wadi site where the event is held. A total of 40,000 people attended either one or more of the four-day event and SAT-7’s social media engagement reached over a million! Testimonies were stunning. Hundreds gave their lives over to the Lord and many who claimed to be atheists experienced God’s divine touch. One young man who was very aggressively defending his atheistic beliefs in the Atheism Tent came up to Pastor Sameh Maurice at the end and told him, “After hearing you speak, I cannot not believe in God!”

Hundreds of couples were ministered to in the Marital Counselling Tent, renewing their vows and confessing serious offenses and infidelity to one another. One woman who came to Count it Right alone, phoned her husband and asked him to come and their marriage was reconciled there.

“Draw me after you and I will run”. Different slogan, different depth, different conference. Onething calls committed Christians to gather for prayer and worship. Onething Egypt was birthed based on The International House of Prayer (ihop)’s Onething, headquartered in Kansas City, Missouri, USA. This year, for the first time, the event hosted Mike Bickle, Director of the ihop, and Misty Edwards, a senior leader and worship leader at ihop. Along with Mike and Misty were several other local speakers and the KDEC worship teams.

Since Onething targets Christian believers seeking a greater depth in their walk with God, the daily schedule was a lot more intense than it was at Count it Right. Each of the three days included two morning sermons and one evening sermon, all preceded with times of worship. It was incredible to see thousands come from all over the nation to pray and worship the Lord.

While Onething initially targeted young adults, each year the age range of attendees seems to widen. As I stood in the huge stadium with approximately 10,000 people in attendance each day, I stood in awe at the children, teens, adults and senior adults, all united to worship the Lord. SAT-7’s social media reach was stunning once again, with a social media engagement of over 650,000!

What a blessing it is to be able to worship the Lord amongst thousands physically and millions via satellite and YouTube in a nation that lies in the heart of a region in despair! Christians in our neighboring countries are being forced out of their homes or killed for the sake of Christ and we are still blessed to be able to worship amongst thousands! May the prayers of the thousands at Onething who prayed for our region in distress be heard!