In a month when suicide bombers killed 43 civilians on the streets of Beirut, residents of the Lebanese capital also had the opportunity to hear far better news in a ground-breaking Gospel media campaign. 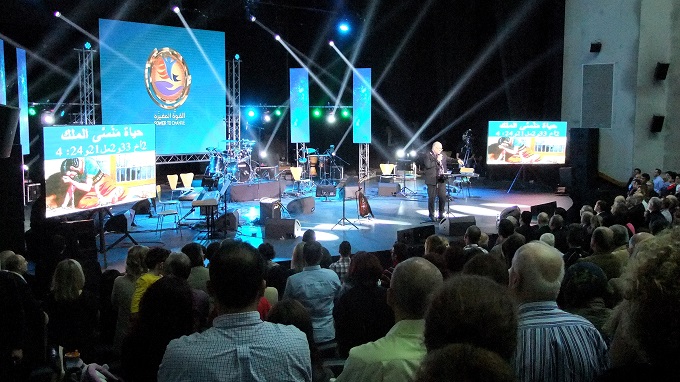 The Power to Change united volunteers from some 57 cooperating churches for the first time. It also combined city-wide advertising using roadside and overhead billboards with advertising on national radio and TV and international promotions on satellite channel SAT-7.

Adverts promoted free DVDs and a book telling the stories of 12 well-known Lebanese whose lives and difficult situations had been changed by encounters with Christ. Among these was Rawad Daou, a SAT-7 presenter, contemporary worship leader and co-host for three live events at the end of the campaign.

Some 2,500 callers rang in for copies of The Power to Change DVD – among them requests for over 1,200 copies for the Bekaa Valley, home to around 400,000 Syrian refugees. Each caller received prayer from telephone counsellors and an invitation to the three closing events at the prestigious Emile Lahoud stadium in Beirut.

On 28, 29 and 30 November there was standing room only in the 1,500-seat venue for these three events. Two Lebanese  TV channels took live feeds of the meetings and Christian satellite channel SAT-7 transmitted the events to viewers across the Arab world.

Each night, worship was led by prominent Christian musicians from Lebanon, Egypt and Jordan and a different Gospel minister spoke of the power of Christ to bring radical change to a person’s life.

On the opening night, Power to Change campaign chair Pastor Joseph Negm said, “At the time of active political movements in our country from one side or another, Power to Change announces a vertical movement from above, a movement inspired by the Holy Spirit in our city to push back the darkness and allow the light of the Bible to shine through.”

From hatred to forgiveness

This was illustrated powerfully in the second night’s message by Pastor Waleed Bitar. After preaching on the conversion of Saint Paul, once a fanatical persecutor of Christians, he shared his own experience of Christ’s power.  Pastor Bitar told he moved from hatred to forgiveness for the killers of his brother whose body was torn apart by a missile during the Lebanese civil war.

At the close of each night, scores of attendees came forward for prayer to experience Christ’s power to change in their own lives. Many more Lebanese and Middle Eastern people across the region had the opportunity as they watched on television.

The Power to Change  was an initiative with local churches of Great Commission Media (GCM) Ministries. A previous campaign organised by GCM and local churches in Northern Iraq focused on “The Power to Forgive” in Spring, 2013 and was also broadcast by SAT-7.

It cost s £6 per minute to air a life-changing programme on SAT-7. By giving just £30 you could enable us to broadcast five minutes of an event like The Power to Change to tens of thousands of  viewers in the Middle East and North Africa. Give now