You are here: Home / Features / Growing up in Baghdad…Bombs, Poverty and Faith
Search

Growing up in Baghdad…Bombs, Poverty and Faith

Lina Dawood is 18 and is from Iraq. She has grown up with the reality of the Iraqi war around her and has seen the devastation. Yet she still has faith. We were privileged enough to meet her and hear her story about growing up in Baghdad through the war and poverty. 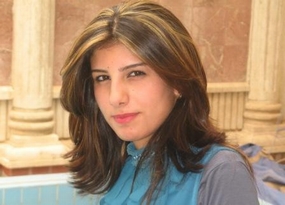 ‘When the fighting began, I didn’t understand what the noises were. My father said it was just people playing outside. I started to cry. Father put cotton wool in my ears to block out the sound.’

Lina Dawood, from Baghdad, was 10 years old when Iraq was invaded by coalition forces in 2003. Now 18, she’s grown up amid war and years of subsequent sectarian violence. A lifelong Christian, she began attending St George’s Church, Baghdad, in 2004 when she moved to her Aunt’s home nearby. Having completed her baccalaureate exams last month, she now works there full time, acting as PA to Canon Andrew White and assisting with youth work and translation.

‘When war came to Iraq, our lives changed very suddenly,’ she explains. ‘It was too dangerous to stay in our home, so we moved to Grandfather’s house. It was still in Baghdad but it had a basement, which was good protection. Fighting outside was bad, so we had to wait before we could even leave our house. When it seemed safe, we ran. We didn’t even have time to lock the door. While we were away, everything was stolen.

‘During the war and since, many people I know were killed,’ she continues. ‘I was 14 when my friend was kidnapped on her way to school. Her father paid a ransom, but they killed her anyway.’

From power cuts to unemployment, poverty and sheer monotony, the effects of conflict reach far beyond the immediate, adds Lina: ‘Each day, we will get just five hours of power. In 56°C heat, we have no air conditioning. I don’t know how to study; I can’t focus. In exams, you’re worrying about the heat rather than what you’re writing.

‘It’s difficult to move around in Baghdad. We have bombs every day; when my Dad goes to work, me, my Mum and my family don’t know if he will come back. When my mum goes to the shop we don’t know if she’ll make it there. Worry makes you tired. It’s draining, you know?

‘We have seen so much of this; people dying in the street, fighting each other. It’s become normal. It’s hard even to feel sad now – our hearts are too full of sadness to take in any more.’

The wounds of war – both physical and emotional – linger for a lifetime, she explains. ‘One of my friends lost the right-hand side of his face in a bomb. He’s only 19. He is so shy now; when he passes people, he covers his face with his hand so no one will see.

‘And when someone loses a leg or a hand, who will help them? It’s really difficult for them to live with that in Iraq – what will they do for work, how will they support themselves?’

She pauses. ‘I wish sometimes I was born now instead of back then, because I remember a different life to this. Before the war, Baghdad was safe. You could visit your friends. It’s sad to remember my life then compared to now. Life is so empty. Young people have nothing to do. Home, school, church, that’s all we can do. No going to the park, no parties, no picnics.’

Lina and her family lost everything in the war, including their home. Through the turmoil, her faith has kept her going, she says. ‘We thank God for each other. He has protected us and helps us. I have a close relationship with God. He has allowed me to be part of a wonderful church and, every day, thanks to church and study and prayer, my faith grows stronger.’

But in Iraq, her faith also places her in danger. Since 2003, Christians in the country have been increasingly targeted by extremists. Last October an attack on worshippers at the Syrian Catholic Church in Baghdad, a short walk from St George’s, killed 58 people. In the months that followed, Christians were targeted, tortured, executed and told to leave Iraq.

‘As Christians, we are attacked; people want to kill us because we follow Jesus,’ says Lina. ‘This is quite a new thing. Before, we lived in friendship with people of other religions. Now some Christians are scared to put a cross around their neck. Many have fled Iraq. But I am proud to follow Jesus; I don’t want to hide it.’

‘God gives me hope. I’m not scared because, whatever happens to me, I have Him. I pray hard and often that he will be with me and help my country. I trust Him.’

Read the next interview with Lina.

Learn more about Iraq in our country profile