You are here: Home / Blogs from the Middle East / Hearing women’s stories
Search

Maggie Morgan is an award-winning filmmaker from Egypt who explores and challenges the treatment of women in her country – and across the Middle East and North Africa – through her TV programmes. She currently produces Needle and New Thread, a live women’s show on SAT-7 ARABIC.

When I think of women in my country and in the Arab world, and when I examine myself in hindsight, I feel ashamed at how smug and arrogant I have been. I always felt that discrimination against women was something that happened to other people, not to me, and not to “us.”

Belonging to a Coptic Christian family, I assumed that Muslim women were oppressed, but of course “we” were not. Belonging to an educated, middle-class family, I believed that other women, those who were illiterate and uneducated, were marginalized, but of course “we” were not. Going to the same school as my brother and getting more or less the same opportunities and privileges, I thought gender discrimination was something that happened to other people, but not to “us.” When I heard about “forced marriage,” I smugly thought of my mother and grandmother as lucky, because they fell in love and chose their husbands.

I always felt that “we” – Christian, educated, middle-class folks – were fine, and gender discrimination was other people’s problem, surely not mine.

In all objectivity, one must say that compared to so many others in our part of the world, we were indeed privileged. In fact, most people in my circles could be considered lucky. But even though lucky, we were certainly not immune. All it took was a bit of light and curiosity to make me notice the threads of discrimination woven throughout our lives – very, very close to home, and perhaps even at home.

My first eye-opener came at university. Egyptian activist Nawal El Saadawi came to speak to my class at the American University in Cairo, the most exclusive and prestigious university in Egypt. She came to speak about female genital mutilation (FGM). I hadn’t heard of this practice before. We all assumed she was talking about practices that happen to other people, far away from us, illiterate people in villages, but surely no one here. She assertively said, “I bet you someone in this room has been circumcised.” We shook our heads and shrugged, thinking she was simply exaggerating to make a point. But to my surprise, a few hands timidly came up! 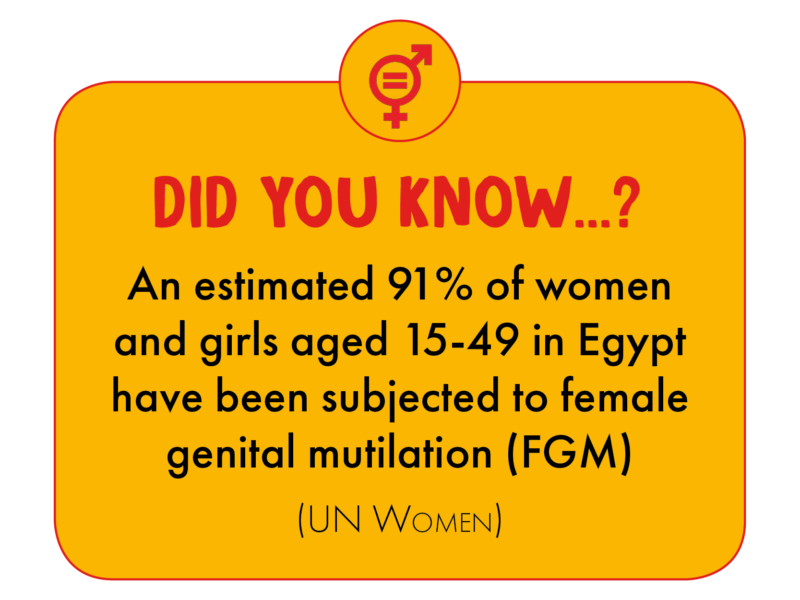 After this incident I went home and asked my mother and my grandmother. Did this happen to you?

“No,” my grandmother said. “Everyone did it to their daughters, but my father refused.” Somehow my great-grandfather was convinced that this practice was unnecessary and unacceptable. And because of him, my grandmother, her sister, and consequently my mother and I were spared this horrible and inhumane practice.

My great-grandfather seems to have been a unique and a broad-minded man. He sent his two daughters to school, just like his son. His eldest daughter, my grandmother, was allowed to marry for love. I know because I have the letters she and my grandfather wrote to each other in the 1930s before they were married.

I thought my grandmother’s story was a typical story. It turns out she was the exception, not the rule.

“Were things really that bad?”

Through reading novels written by women and seeing the very few films made by Arab women, I started to wonder and ask more questions. Was all this – forced marriage, compromised education, repression, marginalization and abuse – everyone’s story? Were things really that bad?

I started to ask more questions. I began very close to home. I knew many older women my grandmother’s age. One of them in particular was close to me, and I was invited over to her home hundreds of times. On the wall was her wedding picture. I had seen it a million times and noticed she was not smiling. I finally asked why. She simply said, “because I was not happy at all.” She was taken out of the French school she loved at 16, forced to marry a man who was 20 years her senior. Female genital mutilation? “Yes,” she said. “My first cousin and I had to do it on the same day.”

Yet despite this, she lived with her husband till his death, raised wonderful children, and even planted a small garden. Her jasmine plants were the biggest I had seen – they climbed the building walls, all the way up to her window. They bloomed until her son, who wanted to expand the building, decided they were in the way. It saddened her and she talked about it many times. But she was quite accustomed to not objecting, so she didn’t object. She just watched him chop them down.

The ease and simplicity with which she shared her stories made me realise that the stories were all there, but I had never cared to ask.

More questions came up, this time to my aunts on my father’s side. Similar stories from my dad’s oldest sister: early marriage, FGM, lack of choice. My grandfather’s watching the news took precedence over my grandma watching a movie. It wasn’t even a matter of discussion. His schedule, when he came home for lunch, the hour of his siesta, and when he liked the house to be quiet – all his preferences took priority over my grandmother’s or anyone else’s. That was simply how things were in most Egyptian homes.

In some ways that is how things still are. How many of us have been shushed because Daddy or Grandpa is sleeping, but were never asked to do the same for Mummy or Grandma?

My maternal grandma used to like chocolate and chocolate ice cream. My paternal grandma used to like watching black and white Egyptian comic films. I remember her smiling. I rack my brain to remember those simple things. Frankly, I do not know what brought joy to these women who impacted me so greatly. I don’t know what they would have done differently, if they had been given more choices.

But there are things I do know: I know what my great-grandfather, who put his foot down and would not circumcise his daughters, did differently and how much it impacted generations and lives, down to my own. I know the power and impact that one enlightened person can make in a family. Through SAT-7 women’s programme Needle and New Thread, I hope to see more men and women who can stand up and say “This injustice stops here.”

In Needle and New Thread, we have many hopes. We pray that we will notice when other people are not smiling and ask why. We dream that more people would notice one another and ask each other: “what’s the matter?” In the programme every week, we work towards creating a platform for more stories to be told and more voices to be heard. Ultimately, we hope that more of these voices will be ones ringing with laughter. ■