You are here: Home / Uncategorised / “I could finally breathe easily”: a voice from Egypt’s Church
Search

“I could finally breathe easily”: a voice from Egypt’s Church

What is it like to practise your faith when your freedom of belief is under threat? Our Cairo-based Communications Officer Mary Joseph shares her experience of living through a time when Christians in Egypt have felt additionally vulnerable.

A few weeks into Lent, as Christians were immersed in daily church prayers and charitable activities, they were hit with the news of the slaughter of Coptic Orthodox priest Arsanious Wadeed on the streets of Alexandria.

A short time later, a Christian woman appeared in a video on the internet denouncing Christianity. The church and Egyptian authorities later announced that she had been kidnapped and forced to post the video, and that they had reunited her with her family.

But the media was already rife with unsettling comments from both Christians and non-Christians. Tension here rapidly builds on social media over issues relating to religion, and everyone feels responsible for defending their own. Moderate voices are almost drowned under the increasing waves of tension. Only when the authorities take action do things settle down for a time until another incident reignites sour feelings.

Immediately after these incidents, I dedicated a special prayer each day asking the Lord to protect all Christians and churches, especially during Holy Week, when all Christians, even those who do not frequent church, attend church prayers.

The build-up of tension comes from an historic accumulation of attacks against Christians, especially during Lent and Easter. On Palm Sunday 2017 two churches in different governorates, Alexandria and Tanta, were targeted with suicide bombings that killed 47 people in total and left 126 injured. Coptic Orthodox Pope Tawadros II was leading mass at Alexandria Cathedral at the time but was not hurt.

At times the Egyptian police force put electronic security doors and extra personnel outside churches during Christmas and Easter. At other times, like this Easter, they do not.

Who next, and when?

Although Christians in Egypt appear not to be under systematic attack, separate incidents against Christians do occur and stir up feelings of insecurity, vulnerability, and even dissociation from society. It keeps one wondering who might next be subject to a discriminatory attack based on their identity, and when.

For months I put my long hair up in a bun after repeated incidents on the Cairo metro and on the street when women would cut the hair of Christian girls because they were not veiled. I still do so when walking in crowded areas.

As Easter Monday crowned Holy Week and we went home safely after a family gathering, I could finally breathe easily. I gave thanks that Easter week had passed peacefully without any incidents to mar this very special time for all Christians in the Middle East. 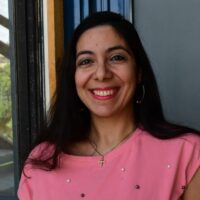 SAT-7 Communications Officer Mary Joseph is based in Cairo, Egypt. She has also lived in Australia and worked as a journalist in secular and religious media. Her passions are reading, writing, travelling and photography.