You are here: Home / Features / The invisible front line
Search

There is more than one way of being on the front line of ministry in SAT-7. While scores of the TV network’s presenters have become trusted and familiar friends through their regular appearance on screen, there is a front line that is less visible but equally important. It involves sitting beside a phone and a computer monitor. 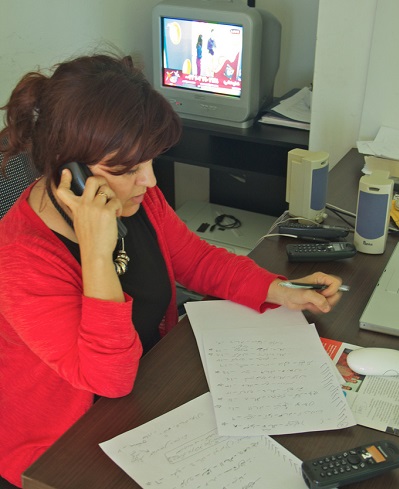 Members of SAT-7 viewer support teams are the first people viewers contact when – sometimes at considerable risk – they contact the studios to seek their direct support.

Since SAT-7’s Farsi language channel (SAT-7 PARS) began using the secure online app Telegram for private communications, viewers in Iran typically use this the first time they contact SAT-7. Viewer support team members monitor and engage with viewers over Telegram but follow up with a phone call if viewers need personal help – prayer, a Bible, or contact with a house church, for example.

Panayiotis Keenan, Senior Manager of SAT-7 PARS, says members of the team see answering these calls as the mission God has called them to.  “When I ask them would they like to go to another department or maybe even have their own show, they say no, being on the frontline is our mission: it’s the reason we are here to support in any way we can our fellow people who are in Iran.”

Mitra, a female member of the team, explained how she feels about serving viewers in this way: “I find it so encouraging and spiritually enlightening!” she explained, “Every time I see people from Iran getting to know Jesus and their eyes are opened to the truth, I feel very joyful. Coming from a similar background, I know what an amazing thing it is when our viewers come to Christ.”

Another member of the team, Bhezad, also stressed the link he feels with viewers from having had the same experiences: “I can relate to viewers that do not have access to Bibles and churches: I understand what that is like. It is my passion to share about my faith with others. This is at the core of my heart.”

Coming alongside at critical moments

He gave an example of the privilege he feels in being probably the first Christian contact a viewer had ever had: “Two weeks ago, I called a viewer who didn’t have any connections with anyone in the Christian community and who wanted prayer. After speaking with him and praying for his needs, he was glad knowing that someone is praying for him and that he is not alone.”

Mitra sees many occasions when she has been able to come alongside a viewer at a critical moment in their lives. “A drug addict called me one day and said he had heard the testimony of Pastor Miltan” (a regular SAT-7 PARS presenter and former drug addict). “He said, ‘Since I heard his testimony I quit’.”

Mitra continued: “Every time he called, we prayed together and I encouraged him to stay clean. One day I was at home cleaning and I felt in my spirit that something was wrong with him so I dropped everything I was doing and I started praying for him. A few days later he called me to say that he had used drugs on that day but then stopped. He is doing very well now.”

In a different culture and on a different channel, Ruth Irsany is Audience Relations Supervisor for SAT-7 ARABIC in the network’s Cairo office. The majority of Arabic-speaking viewers have greater freedom than Iranians to meet with other believers or obtain a Bible. Most are free to contact SAT-7 using all kinds of channels, from Whatsapp to Skype. The needs are often different but viewers may also be facing life-changing or life-threatening situations.

“What thrills me is to see and be part of what God wants to do in peoples’ lives through SAT-7’s ministry,” Ruth said. “I get excited when we receive a testimony of how God changed their lives whether through our programmes or through answered prayer, and mostly when they send us saying “they are accepting Jesus as their personal Saviour”.

“Lately we received many testimonies like one from a lady who wanted to have children for many years and after we prayed for her she got pregnant. Also a father who asked us to pray for his daughter who was going to have a brain surgery and she had a successful operation and is recovering.”

SAT-7 has team members serving all of its channels, including its Turkish language and Arabic children’s channels, and partner counselling centres in a number of countries which provide more locally based support. Every time they answer the cries of a viewer, they know they are supporting another existing or potential member of the Body of Christ.

It’s a mission that not only touches viewers but the team members themselves. Mitra in the PARS team explains how it affects her own life with Christ: “My work is feeding me spiritually. When I leave work, I feel uplifted and fed in my spirit. It gives me an opportunity to help people in Iran and use my gift of teaching and letting God use me.”

You can help to Answer the Cry!

Your gift of £25 will help SAT-7 reach and respond to 15 people every day for a year.