You are here: Home / Features / Iraqi Christians' prayer one year after fall of Mosul
Search

Iraqi Christians' prayer one year after fall of Mosul

Iraqi Christians have requested prayer for their country, as they continue to suffer the consequences of the seizure of Mosul last June.

A year ago Daesh (so-called ‘Islamic State’ or ‘I.S.’) captured the Mosul area and gave Christians three choices: convert to Islam; abandon their property and leave the city; or be killed.

IS later attacked Christian villages and towns in surrounding areas of the Nineveh Plain, the ancestral home of thousands of Christians and other minority groups. Christians were forced to leave, and fled to Kurdish-controlled areas and neighbouring countries.

Most of them are living in difficult conditions in temporary settlements and refugee camps. Many are considering leaving Iraq. Some have been abducted by IS, and it is not known what has happened to them.

Many have lost homes, property, belongings and, sadly, any hope for the future in Iraq – despite everything, many church leaders are trying to do what they can to improve the situation, encouraging Christians to stay and urging Iraqi politicians to seek a solution which will safeguard the Christian presence in the country. 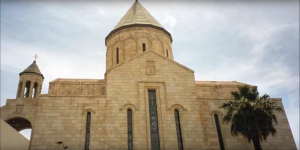 Many churches, monasteries and ancient holy places in the Mosul area have been confiscated and used for other purposes by IS. There has been widespread desecration and looting of furniture and paintings, and demolition of church crosses and gravestones. Precious ancient manuscripts have been burned.

Military action to recapture the Mosul area has not been prioritised. There is no consensus about what should be done to improve security or to help Christians remain in Iraq.

This article is used courtesy of Middle East Concern