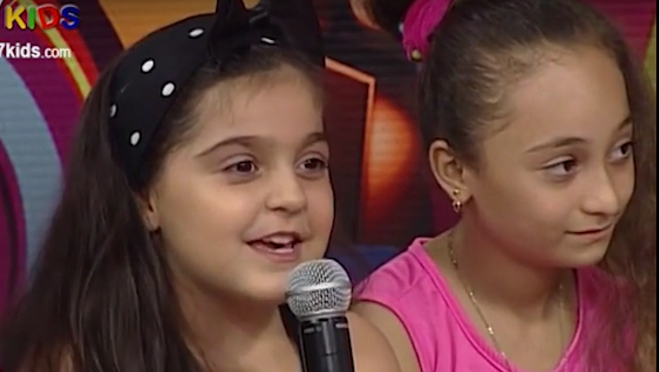 I really feel like the man on the road [in the story of the Good Samaritan].”

This is how nine-year-old Sylvana described her experience as a refugee, having fled war-torn Syria.

She was one of a number of children from the House of Hope School in Lebanon to take part in a special episode of live worship programme Let’s Sing Together on SAT-7 KIDS on 4 October.

Host Marianne interviewed the refugee youngsters about their memories of Syria and their new lives in Lebanon.

While the war left them crying out for peace, their stories highlight how Jesus’ love is bringing healing.

“I would hide and shut the windows”

Sylvana explained that she has been in Lebanon for two years and was asked what she remembers about Syria. She said, “I loved going to my garden and playing with my friends.” But this changed when she started hearing explosions. “I would hide and shut the windows”, she said.

Sylvana now attends the House of Hope School, which is one of many ministries run by Lebanese Christians to help Syrian refugees. She said:

I love that they know Jesus and we learn more about Him.”

She then described why the Good Samaritan is her favourite Bible story: “I really feel like the man on the road,” she said, prompting presenter Marianne to ask, “And Jesus is the Samaritan caring for you?” Sylvana nodded and smiled.

It is hard to imagine the trauma and hardships that these children and their families have endured and the fear for their lives that led them to flee to Lebanon, a country that is struggling to cope with hosting approximately 1.1 million refugees from Syria. Praise God that even in the midst of suffering He is bringing good through the knowledge of His love and compassion.

Many of the refugee children interviewed on Let’s Sing Together spoke of learning about Jesus in Lebanon – some for the first time.