Series Airs as Elections Hang in the Balance

Marking the occasion of Lebanon’s presidential elections, SAT-7 produced and is airing Wars and Faith (in Arabic, Haroob wa Iman). The powerful 10-episode series features interviews with presidential candidates and former players in Lebanon’s prolonged civil war (1975-1990). Presenter Hiam Abou Chedid, a renowned actress and TV presenter, asks the politicians about their experiences living and leading in the war-torn country. 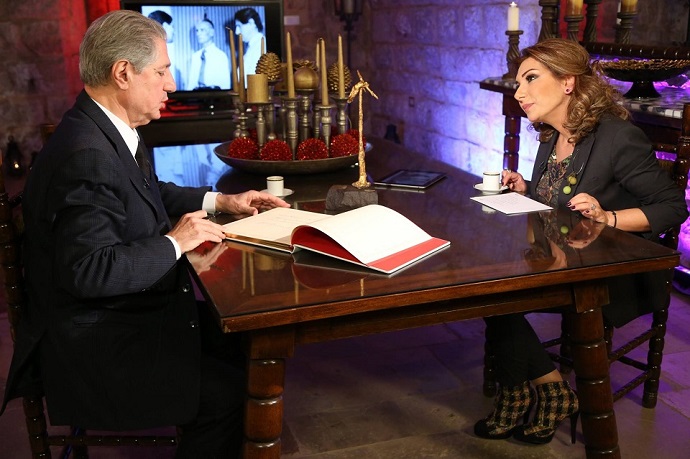 Wars and Faith takes viewers beyond politics, to the personal aspects of candidates’ lives. They discuss everything from childhood memories to marriage, and how they see their relationship with God in the future. Each episode includes a confession segment, allowing guests to admit mistakes they have made.

Production Manager Maroun Bou Rached says “The series will promote peace and show that there is a second chance with God. It lets Christians see that leaders also need Jesus – He’s not just a Saviour for ordinary people. Everybody needs Jesus.”

Two interviews in particular recounted life-changing experiences. Dr Samir Geagea, who turned the Lebanese Forces militia into a fierce and effective army in the 1980s, shared that his 11-year prison sentence was what led him to consider spiritual issues and think about eternal life. It was only after the Syrian army entered Lebanon and imprisoned Geagea that he started reading the Bible and grew closer to Jesus.

Another guest, Sleiman Frangieh, lost his entire family during the civil war. He testified that he has now forgiven his family’s killers and had ordered the release of the person who killed his sister.

Wars and Faith quickly attracted the attention of local industry leader, the Lebanese Broadcasting Corporation (LBC). LBC purchased and aired the groundbreaking series on its own network, multiplying its reach to a wider audience.

Lebanon’s National Assembly will elect the next president for a 6-year term. Elections began on April 23, 2014 but thus far, no candidate has secured the 86 votes required for victory. Another vote is expected to take place on 2 July.