You are here: Home / Features / O Death, where is your sting?
Search

O Death, where is your sting?

Archbishop Angaelos is the first Bishop of the Coptic Orthodox Church in London, and a Patron of SAT-7 UK. He has been awarded an OBE for his services to religious freedom.

As we journey through Lent this year in preparation for the glorious Feast of the Resurrection, we do so at a time when many are in vital need of the hope that salvation promises and brings.

As Coptic Orthodox Christians, we are unfortunately often reminded of the ongoing struggle that our brothers and sisters in Egypt face, whether it be news of terrorist attacks, hate crimes or ongoing religious discrimination in pockets of their homeland. It is not only Christians who suffer attacks in Egypt, but they often bear the greatest proportion of the aggression shown by a fringe element of society that deems them unworthy of existence, never mind being entitled to basic human rights and freedoms.

Despite the struggle that is faced in Egypt, the Resurrection of our Lord Jesus and His active presence in the lives of faithful Christians is at the heart of what gives courage and resilience to Coptic Christians and indeed many others across our world today.

Looking at the reactions of Coptic Orthodox families after they suffered church bombings, shootings, beheadings and other awful incidents that took away precious life, they have been remarkably gracious and forgiving. It is the active spirit and word of God within them, and us all, that enable us to forgive those that wrong us, or those we love.

Drawing from Scripture, when we look at the encounter Mary Magdalene had with our Lord at the tomb, we see that hearing the voice of God at times of despair is what ultimately gives us courage, confidence and hope.

Mary had run to the tomb of her teacher whom she believed to be dead. She stood weeping at the tomb, in obvious despair, only seeing the effects of death and cruelty before her. When the risen Lord began speaking to her, she was still overcome by grief and unable to recognise Him in the midst of her suffering.

Yet when He called her name she turned in elation and held onto Him, saying “‘Rabboni!’ (which is to say, Teacher)” (John 20:16) because she had finally come to recognise Him. After this encounter, Mary ran to proclaim to the disciples that the Lord had risen, and her suffering and grief were immediately turned to joy.

Whether we consider Christians in Egypt, the persecuted worldwide, or indeed ourselves in times of suffering or despair, it is God’s comforting voice, directed personally to us, that will ultimately make all the difference in how we go through our struggles and perceive them.

If we journey through painful struggles with the knowledge that God is with us, knowing and recognising that He is always reaching out in love in a variety of ways, we will never lose hope.

My prayer is that, at times of difficulty, all are able to discern God’s voice, and that their suffering never clouds the truth of the resurrection that death no longer has power over us, no matter how terrifying it may seem. As we read in 1 Corinthians 15:55, 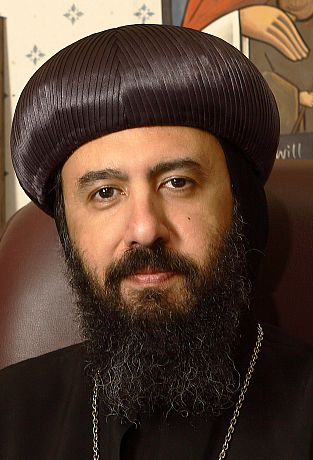 Let us fast from all evil, in purity and righteousness, and let us proceed forth to this Holy Sacrifice and partake of it with thanksgiving,

So that with a pure heart, an enlightened soul, an unashamed face, a faith unfeigned, a perfect love, and a firm hope,

We may dare with boldness, without fear, to pray to You, O God, the Holy Father, who are in the heavens, and say, “Our Father…”