Representatives from SAT-7 TÜRK’s twenty international and local Turkish partners gathered with invited guests on 15th May in Istanbul for the SAT-7 TÜRK Annual General Meeting (AGM) and Dinner. 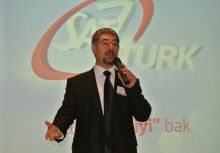 Mr Melih Ekener, the recently appointed Executive Director of SAT-7 TÜRK, opened the meeting with words of encouragement. “SAT-7 TÜRK is at the beginning of a new period,” he said. “It’s technical facilities, studios and staff are experiencing dramatic growth and we believe that this annual meeting together will be another part in this growth!”

The TÜRK production team, half of whom have joined the ministry since January, presented reports on the growing work with the help of local musicians, singers and actors to the 65 people who attended. Dr Terence Ascott, SAT-7 International CEO, brought greetings from the wider SAT-7 family and reported on recent exciting developments throughout other parts of the work, emphasising the increasing SAT-7 audience and responses to its programming in Arabic and Farsi.

TÜRK’s plans include live programming to be introduced in September as part of its 24/7 web broadcasts, which themselves are due to commence on the channel’s Turkish website next month. The TÜRK team moved into a newly rented studio facility this month in order to accommodate the need to ramp-up the production of programming and to facilitate broadcasting of new live shows. This move involved a fast track fit-out, completed in just 6 weeks by the team.

“We have managed, thanks to the Lord and the efforts of our team, to transform a basement that was previously used for paintball fights into a professional broadcast studio,” says Melih. “Around 100 people worked in the preparation of the new studio spaces, packing and transfering everything from our old building.” 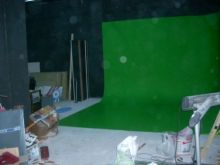 The new facility is located on the Asian side of Istanbul. At 950 sq metres, it is more than twice the total area of the three old apartments that TÜRK had occupied since it began in 2003. The new building has two separate studio spaces, with 5m floor-to-ceiling heights: a main studio with an adjacent control room and a secondary studio which includes a large green-screen for shooting with virtual backgrounds.

“We now have all the basic space to broadcast 24/7,” says Melih, “but additional equipment and lighting is urgently needed to maximise the potential of the new facility. 90 hours of programming have been completed in the first 4 months and we hope to continue to ramp-up programming for the day when we have a 24/7 satellite channel for TÜRK. In the meantime, we will be able to sustain our planned new 24/7 web broadcasts in addition to our 4 hours of daily satellite broadcasting on the SAT-7 PARS frequency.”

On his first visit to the new facilities since the move, Terence Ascott exclaimed, “It is amazing to see just what this new team has accomplished in such a short time and it bodes well for the future development of the channel as it seeks to serve local churches and make the Gospel available to a wider audience of potentially 100 million Turkish speaking persons across the region and in Europe.”