A church in Egypt that was targeted in one of the worst-ever attacks against the country’s Christian minority has testified to God’s grace and blessing in the years since the bombing.

The infamous attack on Al-Qeddesine Church in Alexandria struck worshippers as they were leaving midnight mass on New Year’s Eve in 2011; 24 people were killed, scores injured and the front of the building damaged by the car bomb blast.

But rather than deterring people from attending services and events at the church, the opposite has happened.

In an interview on SAT-7 ARABIC’s flagship current affairs show Bridges, Father Makar Fawzy said, “The devil is fighting the church but God transformed the attack to the benefit of the church. More people repented after this incident and came to the church. You cannot imagine the number of people who returned to the church since then. God always turns evil to our good.”

The church has been a powerful witness to Christ in the way it has responded to the attack. Father Fawzy said the families of the victims put Jesus’ teachings into practice by forgiving the perpetrators, and the church has increased its service to the community. The church-run hospital has expanded its facilities and is offering them to more and more people.

A message of peace 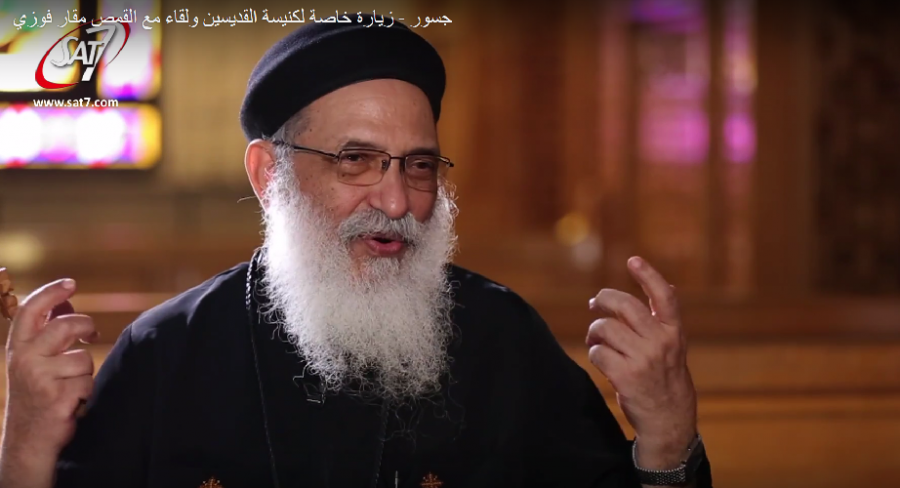 A true Christian can extend bridges and send a message of peace to the whole world by being light to the world and salt of the earth. We don’t have to make huge projects to reflect God’s love. We can reflect it in our daily ordinary tasks and our dealings with others.”

SAT-7 producer Sherif Wahba was moved by his visit to the church. “Al-Qeddesine church is a lighthouse in its service. Even though it is a wounded church, it is forgiving and extends its services to all society members without discrimination,” he said.

SAT-7 broadcasts such inspirational stories about the Christian witness in the Arab world to an audience of millions, giving the Church in the region a platform to share Christ’s message of peace and forgiveness. This is especially powerful in contexts of persecution when those looking at the Church from the outside might expect withdrawal, bitterness or even retaliation.