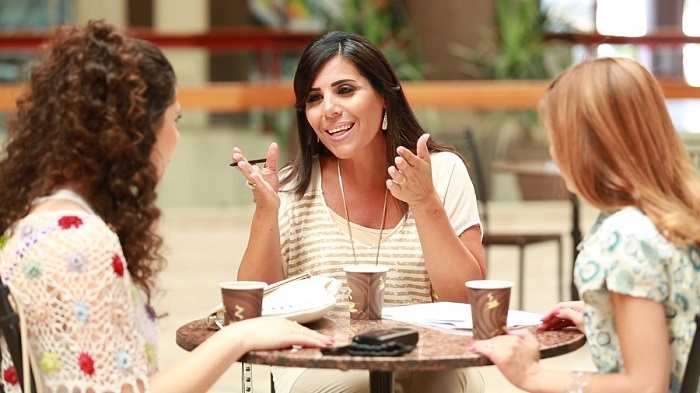 As part of The TEACH Project (Theological Education for Arab Christians at Home), this drama series is designed to show pastors and other believers how to offer and receive counselling. Early episodes show the benefits of seeking pastoral care and Christian counselling, while later episodes address ethics and couples’ therapy.

Jessy Tohme (pictured above, centre), the programme host, is a marriage facilitator who has been involved in women’s ministry for over 13 years. She became well-known throughout Lebanon and the Gulf as the host of a famous radio show called Let Us Talk (in Arabic, Khaleena Nehky). As the radio show gained popularity, Jessy was featured in a documentary and appeared on notable mainstream TV networks MTV, OTV, NBC, and Abu Dhabi al Oula. This experience adds to her credibility when viewers see her on SAT-7.

It wasn’t always common for Lebanese couples to attend marriage counselling, but things are changing. Jessy says, “The past two years, it’s changing because the rate of divorce is very high and they start realising that, OK, we need help.” The need for a counselling programme is immense and people are increasingly open to getting help. Anger, finances, miscommunication, and unmet expectations are just a few of the challenges that Dear Jessydiscusses.

Jessy uses Scripture and simple illustrations to demonstrate God’s will for a righteous life. A bank is one clear metaphor she uses to describe a marriage relationship. Jessy says, “When I do something nice for my husband, I put something in the bank to his credit. When I don’t, I take credit out of the bank. Some couples end up bankrupt.”

In another illustration, Jessy describes tension and conflict as a dance. It always takes two people to continue the dance. She adds, “I will teach one person how to stop the dance and, now, they see miracles in their house. I always tell them, ‘Discover your wife. I’m different than I was 10 years ago.’” These reminders give pause to an otherwise stressful and demanding life for many couples.

As a wife and mother, Jessy draws on her own learning experiences to minister to viewers. Like her viewers, she experiences periodic hard times. Jessy says, “I believe God intentionally lets me pass through this to let me relate to people…This helps me be down to earth and sensitive and, at the same time, have expectations and help them to change.” In this way, she models humility as Scripture suggests in Ephesians 4:2, “Be completely humble and gentle; be patient, bearing with one another in love.” This same practice of humility will help viewers in their family relationships.

Since the programme began airing, viewers have been writing on the Dear Jessy Facebook page to express their excitement. A Jordanian woman shares, “I watched your programme on SAT-7. I really enjoyed it because I found it very rich, making people read and understand God’s Word. God bless you.”

Written and directed by Dany Boustany, with production executed by Juliana Sfeir, each episode of Dear Jessy takes place in a new location in Lebanon. It is the first programme produced by SAT-7 to change location each episode! A flower shop, a children’s classroom, and a shopping mall are some of the changing scenes that keep viewers engaged. Although the programme is produced in Lebanon, it airs on television throughout the Middle East, North Africa, Europe, and North America.

Let us pray that God will move in the hearts of viewers watching this programme, so that He can strengthen their relationships within the home and, ultimately, His Church.

As a wife and mother Jessy draws on her own learning experiences to minister to viewers. Like her viewers, she experiences periodic hard times, she says:

“I believe God intentionally lets me pass through this to let me relate to people…This helps me be down to earth and sensitive and, at the same time, have expectations and help them to change.”