You are here: Home / Programmes / Stories in the Sand
Search

Stories in the Sand

An innovative programme on SAT-7 KIDS tells Bible stories using the creative talents of Egypt’s first sand artist. In Stories in the Sand (in Arabic, “Ramleya fi Hekaya”), artist Michael Romany brings parables to life as he pours sand through his fingers and paints moving images on an uplit, glass table. 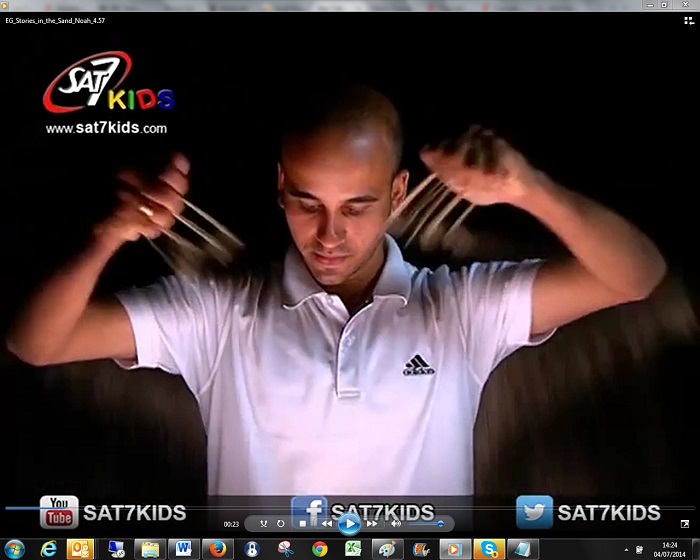 Producer Monir Zakhary and his team have crafted the short, five-minute episodes to capture the attention of children. Stories in the Sand has enacted the Creation and the Fall, the prodigal son, Jonah, the testing of Abraham, and the baptism and temptation of Jesus, among other Bible passages.

Monir says, “I am eager for young viewers to learn about the events of the Bible, its prophets and the message of God’s relationship with man since creation. In the Scriptures appear many of God’s amazing works and events that teach children the meaning of God’s mercy, His love and the greatness of His works and miracles…They will be written in the minds of children in a way they will not quickly forget, especially the young ones who do not read the Bible or go to Sunday school.”

Michael Romany began teaching himself sand animation in 2008 after seeing a video of the technique by a Korean artist online. Michael has already caught the eye of the media through performances narrating important turning points in recent Egyptian history, including the 2011 uprising.  With Stories in the Sand, he says, “I dream to spread this rare art form to the whole world, to use it to the glory of God’s name and offer all the Bible’s stories for children and adults in an easy and attractive way.”

An episode depicting Noah’s Ark put viewers in the moment by incorporating the sounds of waves and animal calls in the background. Narrator Marianne Khalil told the account of Noah building the ark in colloquial Egyptian Arabic, a dialect that is widely understood throughout the Arab World. The narration stayed true to the details of the Bible passage, without adding any characters or details.

At the end of each episode, the narrator introduces a Bible memory verse to the audience. The verse accompanying the story of Noah’s Ark was Hebrews 10:23, “For He who promised is faithful.”

The SAT-7 PARS and SAT-7 TÜRK channels will dub Stories in the Sand into Farsi and Turkish for their viewers – a collaboration that will carry the artistic wonder to an even larger audience.

Throughout the Middle East and North Africa, watching TV is an activity that often gathers the whole family together in one room. Stories in the Sand is a programme simple enough to reach young children, but so artistic and unique that the Bible stories will catch the interest of their parents as well.

Launched on 10 December 2007, SAT-7 KIDS was the first Arabic Christian channel exclusively for children. Independent research conducted by IPSOS in 2016 shows that SAT-7 KIDS is watched by at least 4.6 million children in the Middle East and North Africa region.

If you want to change society then one of the best ways is to impact the children. In a region where half the population is aged under 25, it is vital to provide Christian teaching for children and young people. SAT-7 KIDS airs original dramas, talk shows, cartoons, educational programmes, music videos and so much more, all designed to capture the attention of young viewers.

Many children across the region don’t have access to a Sunday school and SAT-7 KIDS provides them with the Christian teaching they are lacking, helping them to grow in their understanding of God and of the Bible. We know from the thousands of messages SAT-7 KIDS receives from children and their parents that the channel is making a significant difference to many lives across the region.

Help SAT-7 make more programmes like Stories in the Sand

Programmes like Stories in the Sand  are solely paid for by donations or trust funding. Please consider making a gift to enable more children in the Middle East and North Africa to hear the stories of the Bible and hear of God’s love.