An Algerian choir travelled to Lebanon to take part in a special SAT-7 Easter production, described by one of the members as a “rare and wonderful” opportunity to glorify God.

The choir, which belongs to the Full Gospel Church in Tizi Ouzou, gave an inspiring performance of ten worship songs for the one-off special called The Greatest Love. They performed some of the numbers in their own language, Kabyle, a Berber dialect, and the others in Arabic with SAT-7 presenters and worship singers Marianne Awaraji Daou and Rawad Daou.

The progamme was filmed earlier this month for broadcast over Easter and also featured interviews with members of the choir. Marianne and Rawad asked them about the challenges they face as Christians living in Algeria, before urging viewers to send in testimonies of encouragement to: #whenIloveJesus on social media.

Choir member Haddou Nacer described the concert as a “rare and wonderful” opportunity to glorify God and reach people who have not yet experienced His love. He said:

“In Algeria there are very few places of worship for Christians and we do not have opportunities to sing Christian songs openly in big productions like this one. Music is the medium we use to spread the word of God and when people listen to this performance they will ask, ‘What is SAT-7?’ and, ‘Who is Jesus?’” 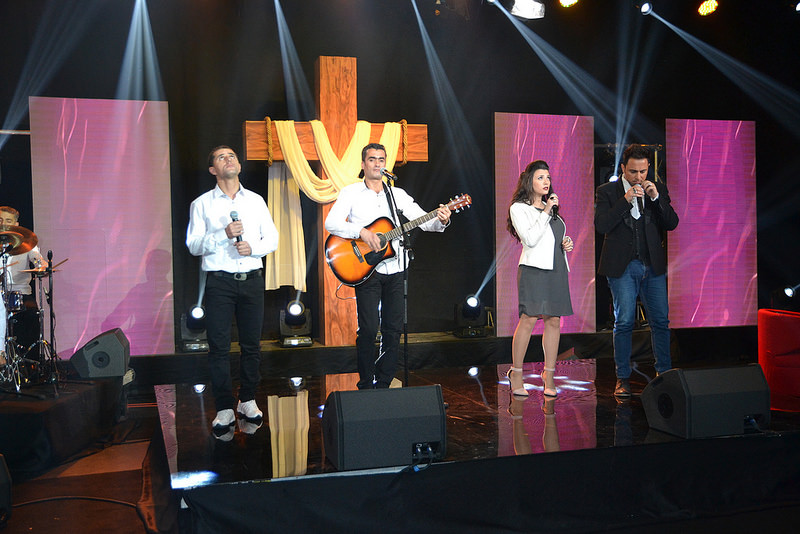 Maroun Bou Rached, SAT ARABIC Programming and Production Manager, said the recording of the Easter concert “is part of the SAT-7 mission to serve the Church in the Middle East and North Africa (MENA)”, adding:

“The people of Algeria are far away but we are connected to them and by broadcasting this special performance we are showing that SAT-7 supports them.”

Churches in Algeria are seeing an explosion in numbers, particularly among the Berber people, and SAT-7 is making programmes specifically for – and featuring – these new believers.

Every Sunday, SAT-7 broadcasts a service from a lively church in the Atlas Mountains to enable isolated believers in North Africa to take part in Christian worship.

Free Souls features the testimonies of Christians speaking in the Kabyle (Berber) dialect. The episodes are subtitled in Arabic to make them accessible to viewers across the region. This simply-produced show is making a huge impact. SAT-7’s telephone counselling centre in Algeria received around 2,000 calls between August and December, most of them in response to Free Souls. Many of the callers said they had been so encouraged by the testimonies that they wanted to record their own! In September, 23 callers gave their lives to Christ!

Another SAT-7 programme for Algerian viewers is First Step. Presenters in this discipleship programme for women play the part of new believers discussing common questions that Algerian newcomers to Christianity are eager to have answered. This series is particularly helpful for new believers who cannot attend a church either because there are none where they live or because of opposition from their family to their faith in Christ.

The Church in Algeria has experienced tremendous growth over the last 20 years but Christians are still a tiny minority. There are an estimated 75,000 believers out of a population of 40 million. Constitutional reforms earlier this year strengthened religious freedom in the country but Christians still face restrictions in their worship and witness. SAT-7 provides a vital spiritual lifeline for isolated believers and gives Algerian Christians a very public platform to share their faith – an opportunity that many have been quick to seize.