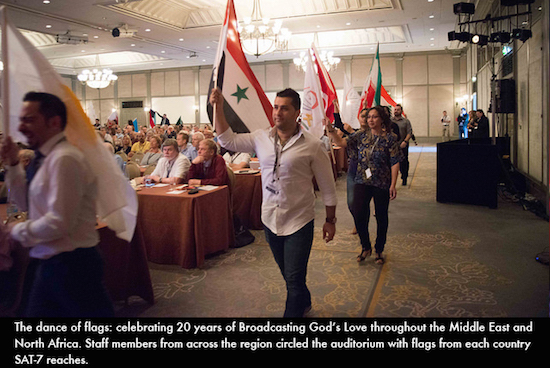 Network 2016, held in Nicosia, Cyprus from 6-8 April, celebrated how God has used satellite TV to bring hope and love into the homes of millions across the Middle East and North Africa (MENA) over the past 20 years.

International supporters and official partners, church leaders of various denominations, local VIP’s and staff from SAT-7 offices and studios participated.  Dr Terence Ascott, founder and CEO, shared how SAT-7’s story is testament to God’s faithfulness, saying “Without doubt, God has provided for this ministry in a miraculous way – in terms of people, funding, security and overcoming many obstacles.”

More than 80 percent of the content on SAT-7’s five channels – SAT-7 ARABIC, SAT-7 PARS, SAT-7 TÜRK, SAT-7 KIDS and SAT-7 PLUS – is today produced by local Christians. Throughout the conference, participants were able to hear reports from each of the channels. Many viewer testimonies, video clips and samples of programming content were shared. The growth of the channels, and the organisation as a whole, has been phenomenal. Today, SAT-7 operates from 11 different locations internationally, with over 840 hours of programming aired every week. 31 May 2016 marks 20 years from the date of the first broadcast; a very different time for the ministry. 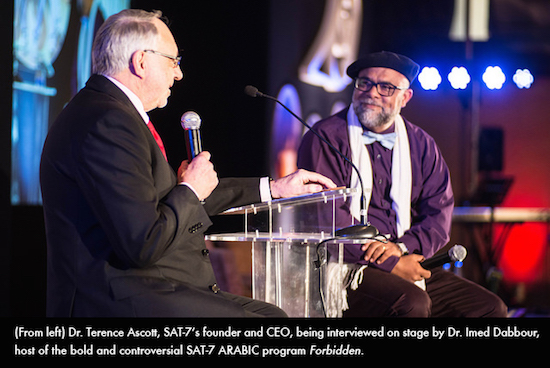 Dr Ascott spoke at several different sessions throughout Network 2016. Looking back to its humble beginnings, he reflected on how, first Arab Christians and later Iranian and Turkish Christians, made the brave choice to go on-camera and publicly share their faith. It was inspiring, he shared. “In truth, when we started, we had a great vision – to use uncensored satellite TV to share the Gospel in a part of the world that had been closed to Christian witness for many centuries. But we had very little appreciation of the practical work or skills needed to achieve the vision.”

When the concept for an indigenous Christian television channel in the region was first presented, it was always met the same objections: Arab Christians would not risk showing their faces on camera; it would be impossible to fund; governments would not permit the making or broadcasting of such Christian programmes.

“One by one, these objections and obstacles were overcome. SAT-7 is ‘owned’ by all denominations; broadcasts across 25 regional countries, and today has studios in three Middle Eastern capitals, as well as at other strategic locations.”

In this day and age, technology advancements are rapidly increasing. As satellite television remains SAT-7’s main media platform, Dr Ascott approached the question of SAT-7’s relevance today, and in the coming years.

“Satellite TV is still the only visual media that can get into people’s homes without the potential of censorship or jamming. It reaches even the most un-wired parts of the MENA. When it comes to consuming video content, Satellite TV is very cost efficient compared to Internet streaming – reaching millions of people with excellent picture and sound quality, with no added costs if another million people tune in. It is also easy for non-readers to navigate the controls and view satellite TV channels. Without hesitation I can say that it is still very relevant!” SAT-7 continues to branch out on to new media platforms.

“There are wonderful new internet-based visual-media strategies that we are now using and should continue to develop into the near future, one that will be very different to that of today,” Dr Ascott says.

SAT-7’s highest governing body, the SAT-7 International Council, met just before Network 2016, to review the ministry’s progress and approve the ministry’s plans for the coming year. The 28-member Council is made up primarily of Middle Eastern Christians and all but four members of the Council were able to attend. Among the absentees was Mar Gregorios Yohanna Ibrahim, the Syrian Orthodox Bishop of Aleppo – who was kidnapped in northern Syria three years ago, together with his colleague Greek Orthodox Bishop Boulos Yaziji, also from Aleppo. Their status and whereabouts remains unclear, as does that of dozens of other abducted clergy in Syria. SAT-7 staff and supporters continue to pray for them. 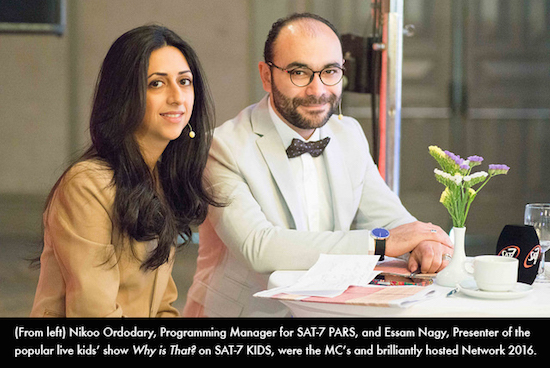 “As a non-governmental organisation that solely relies on our donors, partners and supporters, it is crucial that we regularly meet with them and, together, share our passion and vision for the future of this ministry,” said Mette Swartz, SAT-7’s International Communication Director.

“Their dedication through prayer and contributions over the years are the reason we are still here. Having a record-breaking number of attendees at Network 2016, people who still believe in our mission and vision for the future, is so encouraging and we hope to see many more attend our Network meetings in the coming years.”

Hear SAT-7 founder and presenters at Envision in Oxford

We realise that not everyone can travel to SAT-7’s international conference. That’s why on 21 May SAT-7 is celebrating 20 years of the ministry at Envision, a special one-day conference in Oxford. This will offer the opportunity to hear and meet SAT-7 founder Dr Terence Ascott and other SAT-7 speakers including channels director, Rita Elmounayer, and Nikoo Ordodary, presenter and programming manager on SAT-7 PARS. Worship will be led by UK-based Iranian Christians and there will be special video messages  from other SAT-7 programme presenters. Breakout sessions will show a range of ways in which SAT-7 broadcasts answer the cries of Middle East viewers, including women, persecuted believers, and the region’s burgeoning youth population. Places are free but you do need to reserve your place: most have already been taken!