A UK studio which produces and broadcasts programmes for Christians across the Persian-speaking world has gone live after an eight month period of rebuilding and refitting. The SAT-7 PARS studio in London is one of two Farsi (Persian) language studios run by SAT-7, a Christian satellite broadcaster sharing the Good News with over 15 million viewers across the Middle East and North Africa.

A special live television show for the Persian New Year (Norouz) on 20th March marked a twin celebration – firstly of the most joyful festival in the Iranian calendar and, secondly, for the re-launch of the SAT-7 PARS studio. 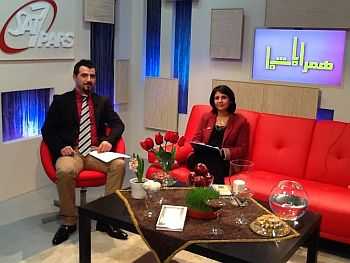 “Norouz means new day,” said Channel Director Sara Afshari. “It’s a huge part of Persian identity, it belongs to the entire Persian speaking world and it celebrates spring as a new day for the earth and a time of hope.

“It was so fitting to re-launch the UK SAT-7 PARS studio on this day because this is also a new start for the channel as it offers the hope of Christ in a world longing to be made new.”

The newly equipped studio has enabled an increase in the channel’s live broadcasting output with four programmes addressing family life, youth concerns, social issues and questions of belief and theology going out live from the UK each week to the Farsi-speaking world. These complement highly popular live shows for children (Carousel) and young adults (Dandelion) which are broadcast from its Cyprus studio.

Last September SAT-7 PARS celebrated ten years of beaming the good news of Jesus to over 2 million adult viewers* within the restricted country of Iran itself, and to thousands living abroad.

During 2012 audience response to the channel grew by 33%. The aim of the increased amount of live programming, along with greater integration with the channel’s websites and social media, is to increase this by another 80% in 2013.

The live shows are part of a 22-hour-a-day broadcasting service which includes Bible teaching, a “Seminary of the Air” programme designed to equip the leaders of Iran’s many house churches, programmes for women and children, worship, music programmes and movies.

*InterMedia telephone research conducted in 2011 indicated a total audience of almost 1.8 million persons over 15 years of age. Since Iranian respondents are likely to be cautious in replying to telephone research from outside the country, SAT-7 PARS believes the audience is larger than indicated, and probably at least half of the 5 million who admit to being aware of the channel have watched it in the last 12 months.