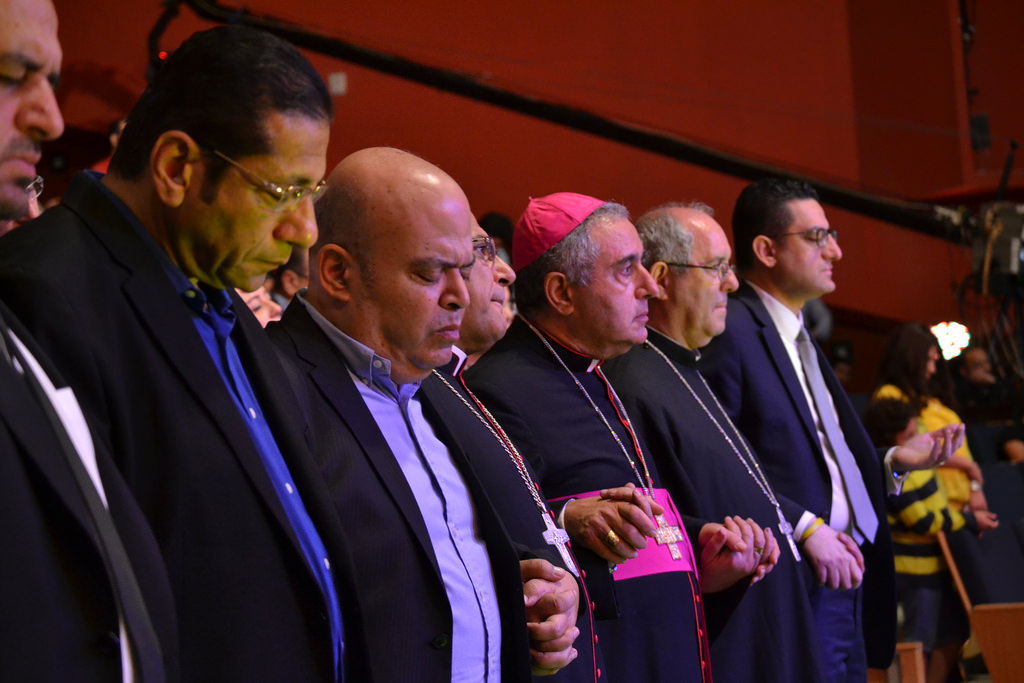 Around 800 young people and families of many Middle East denominations joined to pray for this war-torn region and its refugees at the American University in Cairo on 31st of October.

The concert, called “I Love My Country”, was the brainchild of Egyptian praise team, the Good News Team and Christian TV network SAT-7.

Bishop of the Chaldean Church in Egypt Philip Negm, His Grace Bishop Ermia from the Coptic Orthodox Church, and the Vatican ambassador to Egypt Bruno Musaro attended the concert. They held hands in prayer for peace and safety of the people in the Middle East.

SAT-7 Executive Director, Farid Samir, encouraged those taking part by saying that evil and good lived side by side in the region. It could even be found in the same home. But those who choose God choose life. He cited the story of the two brothers who came from the same family, the Booth family. One, John Wilkes Booth, chose death by assassinating President Abraham Lincoln. The other, Edwin Booth, chose life when he saved the life of Lincoln’s son Robert Todd Lincoln.

Adel Onsy, Head of Good News Ministry, said: “We are not here to sing and celebrate, but we are here to pray from our hearts to God for our countries, our region, for those who lost their homes, whose daughters are being sold as slaves, whose sons drowned in the sea, for those separated from their families and for those who face death by bombs everyday in their countries”.

SAT-7 UK Executive Director Rachel Fadipe explained: ”Unfortunately, SAT-7 was unable to broadcast the concert live because of some questions over broadcasting regulations which have been raised by Egypt government officials and that affect SAT-7’s Egypt studio. But millions of viewers were able to add their voices to the prayers when we broadcast the event the following day as part of SAT-7’s international Day of Prayer on 1 November.”