Egypt news SAT-7 ARABIC
SAT-7 ARABIC has been one of the first channels to take advantage of a new live broadcasting service from YouTube. On 18th May the station aired its first programme live on the YouTube Live channel, three days after the service began. The online service provider expanded its services on 15th May to all channels that have over 1,000 subscribers and maintain good standing with copyright laws. With over 16,000 subscribers, the SAT-7 ARABIC channel easily exceeded the requirements.

Albert Fawzi, Operations Manager at the SAT-7 Egypt studio, explained the significance of this step: “YouTube Live broadcasting is free and will increase the reach of SAT-7 ARABIC broadcasts exponentially. Arabic speakers who live outside the satellite footprint of SAT-7’s channels now have yet another and better way to watch major events live on Android and iOS smart phones, tablets, computers, laptops, and smart TVs. This is especially important for the large community of Arabic-speakers living in Europe and the UK.”

Convenient features support SAT-7’s TV Everywhere strategy. The video quality automatically adapts to each viewer’s Internet bandwidth. The viewer can press pause during the live broadcast and later resume watching from the same point. Albert Fawzi adds: “People can even rewind the video or search back to a specific point to watch a song again or a verse they liked while the live event is still broadcasting. The complete live event video will be available on YouTube, for anyone who missed it, a few minutes after the event finishes.” During and after the broadcast, users can post comments and prayer requests to interact with a global community. This makes it simple and fun for people to enjoy watching SAT-7 online. 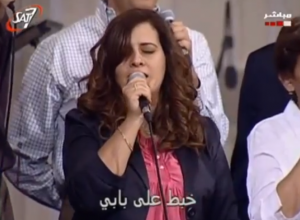 The first SAT-7 event to be aired on the YouTube Live channel was a 4 hour prayer service on 18th May at Kasr El Dobarah Evangelical Church in Cairo. The event was themed “I will pour out My Spirit on all people.” The majority of viewers watching the event on YouTube Live were from Egypt and the USA, with many others tuning in from France, Canada, Jordan, and across the world.

Earlier in the month, the SAT-7 ARABIC channel on YouTube reached another enormous milestone. On 5th May the channel exceeded 10 million views since its creation in 2008! This number reflects not only the popularity of the channel, but also the spiritual needs of millions of people seeking answers and fellowship through SAT-7.