Soaring prices for staples are hurting the most vulnerable families and communities around the world, including in Egypt. To help us focus our prayers on those who are struggling, including our Christian brothers and sisters, SAT-7 Egypt Communications Officer Mary Joseph shares the impact she sees around her.

Millions of poorer Egyptians who rely on the country’s round, brown flatbread as a staple food felt the impact of the Russia-Ukraine war in a matter of days. Ukraine is a major source of Egypt’s flour and the sudden breakdown in supply sent the price soaring from 50 piasters to 75 piasters for a loaf. The Sterling equivalent is 2p to 3p but in a country where the median monthly income is £374. The increase triggered public fury, so authorities stepped in to subsidise the flour at government bakeries and reset the price, threatening a fine to bakers who charged more. To guarantee a profit, however, bakers came up with their own solution and made the loaves smaller.

Bread is a staple in every home in Egypt, consumed during every meal. To make it affordable, every Egyptian on a low income is entitled to a card for subsidised bread with which they can purchase 20 loaves per day. Even though the actual cost of producing one loaf is 65 piasters, the government makes up the shortfall.

Those with less means fill sandwiches with pasta or fried potato because meat and chicken were beyond their budget even before the price increase. The prices of other staples, such as rice, pasta, beans, and oil, have also increased.

Grocery prices rose to unusual levels. For example, vine leaves went up to 100 EGP (GB £4.40) a kilo but later fell to 60 EGP and continued to fall gradually. Vine leaves are stuffed with a mixture of rice, mincemeat, and herbs and cooked as a side dish. Other vegetables also saw dramatic price rises. Prices also vary between government outlets and private grocers and markets. Since many families purchase from their local grocers, they are left at the mercy of unofficial prices because private shops are not monitored by government officials.

Mid-April and later mid-July saw increases in the price of petrol, and the prices of other commodities followed because of transportation costs. Two days earlier I had tried to fill my car with petrol, but the station staff claimed their electricity was out. I believed them and left, but when I returned two days later the price had increased. Food and beverages climbed around 25 percent between April 2021 and April 2022.

I see through my work in SAT-7 that when people are forced to go without, or when anxiety over rising prices is everywhere, as well as nourishment for their bodies they need spiritual food more than ever. While we cannot alleviate physical hunger, my colleagues and I at SAT-7 in Egypt know what a difference it makes when a person can lean on God in times of crisis.

Please pray with us that viewers will be spiritually encouraged by SAT-7’s programmes, such as You Are Not Alone, which airs weekly from Lebanon, as well as our many discipleship programmes, and special teaching productions such as Hope in Times of Hardship. This began airing just as price increases caused by the conflict began to bite. Pray that those who need God will find Him there and receive comfort and peace in these difficult times. 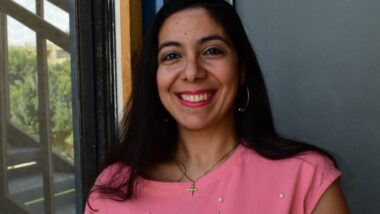 Mary Joseph is based in Cairo, Egypt. She has also lived in Australia and worked as a journalist in secular and religious media. Her passions are reading, writing, travelling and photography.