Christmas came early ten years ago when a brand new channel called SAT-7 KIDS, planned as a present for the children of the Middle East and North Africa, was launched on 10 December 2007. Instantly well-received, it has proved a bright, welcoming haven for millions of young viewers.

Luke 2:52 tells us that when Jesus was a child He “grew in wisdom and stature, and in favour with God and man.” That’s a tough task for kids living through times of persecution, fear and violence. But SAT-7 KIDS exists to give children what they need to grow well: hope, fun, affirmation and the knowledge that they have a Father who loves them and will never leave them.

Ten years on, there is much to celebrate. Delighted relatives often comment on the improved behaviour, creativity and inner peace they see in their children after watching the channel. In stark contrast to the extremist ideologies and brutality broadcast on many other Arabic language channels, SAT-7 KIDS’ colourful, characterful, Christ-centred programming can be life-changing.

It was for Moussa in Morocco. After praying to God as a 12-year-old, he had a vision of Jesus saying, “Come to my house.” Despite resistance from his parents, when Moussa discovered SAT-7 KIDS he says he knew “This channel is for me!” A regular viewer of our first children’s show, As-Sanabel, Moussa continues to follow Jesus in his 20s.

The channel also helped change Michael’s life. In 2014, the seven-year-old had not seen his father for three years. After his parents’ marriage broke down, he moved to Hungary with his mother, losing all contact with his dad. Desperate to find Michael, his father Adham wrote to Mr Know, the presenter of one of his son’s favourite shows, Why is That?.

In response, Mr Know prayed for the family live on the show. Miraculously, Michael was watching and got in touch, asking to be put in contact with his father. Adham expressed his gratitude, writing: “Praise God, I spoke with Michael and he told me how much you’ve encouraged him… I can never thank you enough.”

One girl from crisis-wracked Yemen captures the thoughts of many young viewers as she writes, “I want to tell you that I enjoy your wonderful programmes. I want to greatly thank you for your care for our childhood and for equipping us fully. I also want to thank you for your supreme message of peace and love.” 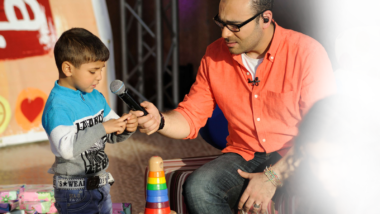