You are here: Home / Latest News / Syrian children give thanks for answered prayer
Search

Syrian children give thanks for answered prayer

Learning to trust in God’s provision helps children in war-ravaged Syria to grow strong in their faith despite the suffering around them. A special SAT-7 ARABIC report showed how one Syrian Sunday School is helping children to depend on God – even when it comes to the toys they dearly cherish – and to give thanks for answered prayer.

Syrian children often miss out on childhood’s simple joys because their families are struggling just to survive. In an interview with presenter, Dr Yvette Elbayadi Isaac, a Sunday school teacher from the Presbyterian Evangelical Church in Aleppo shared how the conflict has affected the children in her church: “Many of the children lost their toys when their homes were destroyed. Their parents are most concerned with providing their children with food and clothing, and toys are not on their list of essentials. But we know how much toys matter to children and bring joy to their hearts more than anything else. These kids haven’t had toys for six years now – since the war began.” 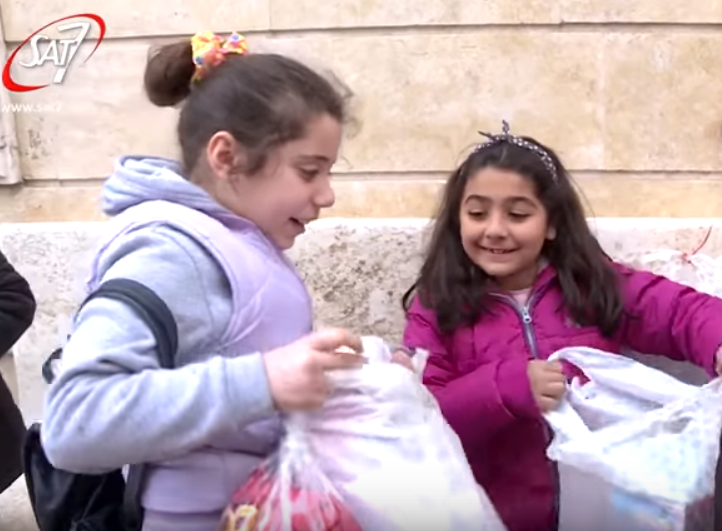 Amal, another Sunday school teacher, explained that the little ones were encouraged to bring their desires to God. Inspired by her own childhood, when she experienced a similar answered prayer, she taught Matthew 7:7: “Ask, and it will be given to you; seek and you will find; knock, and the door will be opened to you.”

Amal told the children “if you want a toy, then ask Jesus.” “We held our hands together, and each one of us asked the Lord for toys,” she said. “The children had specific toys in their minds which they requested from the Lord…[and] three months later, the Lord sent them the toys!”

Through God’s amazing provision, financial donations flooded in and the Sunday School teachers were able to purchase toys for the children, more quickly and abundantly than they had anticipated. They bought so many that the owner of the toy shop was amazed, thinking that the teachers must be planning to sell the toys on.

God provided enough toys that there were even some left over. One of the teachers explained: “We will give the rest of the toys to needy children because we want to give them the message that even during war, the Lord is with His children.”