You are here: Home / Features / The exiled Syrians discovering the God of miracles
Search

The exiled Syrians discovering the God of miracles

In the first of a series of articles from Lebanon, Lindsay Shaw from SAT-7 UK reports on how God is changing lives among Syrian refugees in the Bekaa Valley 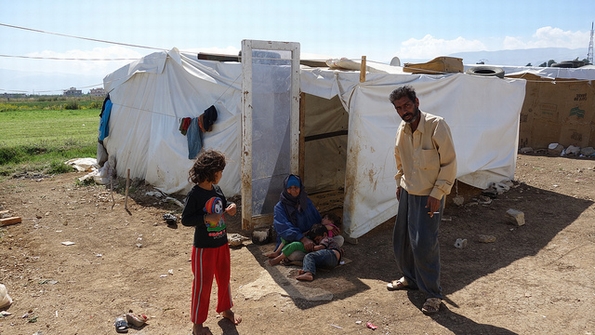 A soaring unfinished entrance wing announces a church in the midst of major expansion. But it is the hundreds of people the church is serving that reveal the real growth at the church in the Bekaa Valley, Lebanon.

Church community worker, Ayman*, tells me that not only are hundreds coming to the church; it is running a school for 300 children and is helping 2,000 families.

A former carpenter, Ayman has been working full time with destitute Syrians and needy locals since 2012 when most of the refugees began arriving. “I love helping Christian people”, he says, “but there’s something special about helping Muslim people.”

Three such people are in the church the morning I visit.

Bassam* is a 22-year-old whose journey from Daraa, in Syria, has been matched by a spiritual journey just as siginficant. It began seven years before when he first came to Lebanon for work. A Muslim and a Christian friend were arguing over whose faith “was right”. The Christian asked, “How can you say the Bible is corrupted when a verse in the Quran says, ‘Ask the people who wrote the Bible about the truth’?”

Disappointed when his friend couldn’t answer, Bassam said he began his own research and decided to “read the Quran deeply to prove Christians wrong”. One of the people he questioned in his research was a Muslim sheikh who said Christians had four Gospels and they were all different. When he told his Christian friend this, he said each wrote about Jesus’ life in his own way, and he gave Bassam a copy of the New Testament.

“I told my Mum I worship the God of miracles,” Bassam says. “She didn’t know what to say…”

For five years Bassam kept the New Testament and when he started reading it, he said he began “hearing Jesus’ voice”. He says, “God touched my heart through the verse, ‘Love your enemies’. I started feeling happiness, feeling God wanted me to hear his voice and not care what others said.”

Bassam’s mother still lives in Daraa while other family members are in Jordan. He says he prays every day that God will keep his mother safe and talks to her by phone. Conditions in Daraa are very bad and many of his friends were killed while trying to escape from there.

“I told my Mum I worship the God of miracles,” Bassam says. “She didn’t know what to say – it was completely new to her. I told her of Muslims who followed Jesus and she was astonished.”

Ayman says the church has trained Bassam as an electrician and is giving him lots of work. “Everyone loves him,” he added.

“I pray Jesus is will bring peace”

As Bassam chats, Shadia*, another Syrian the church is helping brings tea. She fled the city of Daraa two and a half years ago with her husband and three young children.

Life there had become unbearable with, Shadia recalls, “no electricity, no water” and even bread too expensive because no one was able to work. She describes “bombing and not knowing where it was coming from…dead bodies along the road as we fled”.

Then something happens that I will notice again and again in talking to Syrians during my visit: Shadia becomes quieter and says, “I want to tell you something.” Her voice breaking, she says, “I am praying for peace. My brother is missing in Syria – he didn’t do anything wrong. I pray Jesus will bring peace. I pray for my family in Daraa.”

The third visitor to the church today is Waafa*. Ayman has just been talking about Waafa, the Syrian lady who he described as “so passionate about the spiritual meetings” at the church that she visits every day. Right on cue, she appears.

Ayman first had contact with her when she rang him after seeing children reading a Bible in the camp. She wanted one too! When she started believing in Jesus, she challenged her 13-year-old daughter to see who would finish the Bible first!

What has Jesus given her? “Freedom, happiness, peace,” she smiles.

One step at a time

Those like Waafa, Shadia and Bassam, who are finding their feet as refugees in a new country – with all the challenges that involves – are also progressing step by step in their new relationship with God.

“Because of what happened in Syria they changed their perceptions of their religion, but they are on a journey, taking small steps,” Ayman says.

“We pray for all people that they will hear the voice of God,” Ayman says. “We tell Muslim people and Christian people we love them.”

*Names changed for security. Image does not show people connected with this story.

SAT-7 seeks to support refugees through its stream of education programmes for displaced children, My School, and its varied programming which offers Christian hope, values and teaching for all ages.