You are here: Home / Features / The moral conundrum of the Syrian refugee problem
Search

The moral conundrum of the Syrian refugee problem

As European Union leaders meet again with Turkey in their struggle for a humanitarian and comprehensive policy to stem the incoming flow of migrants, there are a number of moral issues that need to be better understood and addressed, says SAT-7 International Executive Director Terence Ascott.

Europe seems to have settled on a simplistic division of those coming to its shores. There are “economic migrants” (or simply, “migrants”, defined as those not in need of international protection) and “refugees” (in practice, meaning those coming from the war zones of Syria or Iraq). The goal of this is forcibly to return all economic migrants to where they have come from, and trade with the Turkish government the return of unregistered Syrian refugees who cross to Europe for an equal number of properly documented UNHCR refugees from camps in Turkey.

But the current round of talks are fraught with legal and moral issues.

On the positive side, the UNHCR’s long-neglected policy requiring that all “refugees” register in their first country of refuge is at last being recognised as having legal and moral common-sense.

The Syrian refugees who flee conflict and danger in their homeland to Turkey are indeed refugees! But are they still “refugees” when they take the dangerous sea crossing to the Greek Islands? After all, Turkey has offered them immediate protection from the threat of violence at the hands of the Syrian regime, ISIS, the Al-Nusra Front and others.  Understandably, though, many feel they could do better for themselves and their families in Europe. The reality is that many in Turkey live in deeply sub-standard housing and few receive any government aid. Germany especially offers a far more attractive alternative as it appears to have offered to take any Syrians fleeing from the unspeakable chaos of their homeland . 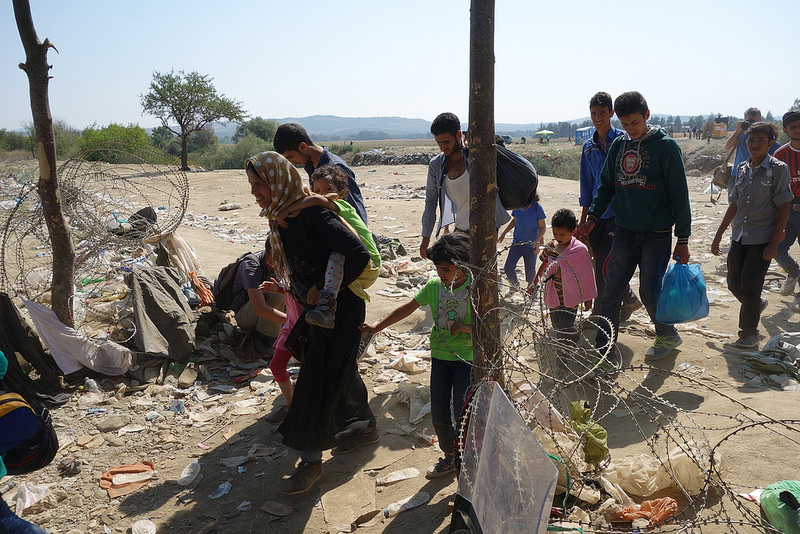 So they set out for a better and more predictable life than that offered in the camps. But, as they cross the Mediterranean, in the logic of international law, these weary Syrians become “economic migrants”! They are no longer “refugees” fleeing a country in fear of their lives, seeking international protection.

But is there a real difference between a Syrian in Turkey wanting to get to Germany and the much publicised migrants in Calais who want to get to Britain? While the first group tend to be viewed sympathetically, those in the second group often face hostility, perhaps because some are more obviously economic migrants or because they have already reached an advanced country where genuine refugees can apply for asylum.  Both groups are in lands where their lives are no longer in danger but both want more – more opportunities for a better future, for themselves and their families!

However, even if we accept that the migrants who began their journey in a war zone should be given higher priority within Europe, there are other moral considerations.

There are now a total of over 4.4 million registered refugees living in Turkey, Lebanon, Jordan and Iraq awaiting possible onward re-location under the supervision of the UNHCR. To them and many others, those who take to the boats have to be seen as “queue jumpers”. The UNHCR apply strict criteria to prioritise the needy and those that are most deserving of overseas relocation – whereas the migrants who cross the Aegean go through no such “needs assessment” or other screening.

Is it therefore morally permissible to prioritise the migrants with the most initiative, most money, strongest bodies – because these are the ones who, in general, make it through to Northern Europe? Is it a question of the survival of the fittest – a sort of obstacle race that Europe can use to its benefit to be assured that able new arrivals have something to offer their ageing societies? And if this is true, is that a moral way to screen the migrants, or is it a policy that is mostly self-serving?

On the other hand, the legality and morality of the “one in, one out” solution proposed by Turkey is very questionable.. Is the risk and cost taken by one refugee being used to “pay” for or justify the placement of another? Why are these numbers being linked to each other? Only to motivate the Turkish coastguard to intercept more boats?

Certainly international and EU law does not permit the blanket return of the immigrants currently in Greece. Each person has the right to have their individual case examined before such decisions can be made.

Church leaders, including the head of the world-wide Anglican Communion, have spoken out to say that it is not wrong for Christians in Europe to be concerned about the growing influx of refugees on European communities and social services.  But being concerned is not the same as taking a political position, and if Jesus was living in Europe today it is thought that He would not be taking one either.

Jesus became a refugee in His early childhood, fleeing a jealous King Herod. He would have remembered very little of those early and difficult days for his parents, fleeing to a country with an alien language and religion, facing a dangerous desert crossing as they journeyed down in to Egypt – but it is expected that Mary and Joseph would have often recounted the journey and its challenges to Jesus as He was growing up.

So, how would Jesus respond to the refugees on the streets of Europe today, be they “refugees” or “migrants”? As He did with the dispossessed and needy in His own time – with love and compassion, seeking to help and to heal, but being more concerned with their relationship to His Heavenly Father and how they would spend eternity.

Perhaps we should see ourselves as the Hands and Voice of Jesus here on earth, ready to serve as He would have served. Today, surely we see Jesus in the lives of those who wade out into the cold Aegean waters each morning to help exhausted and hypothermic families make it ashore; in the faces of those providing food and medical services in the make-shift camps along the now-closed borders in the Balkans; and in the love and hospitality shown to dazed migrants arriving at the central station in Berlin and other major European cities.

Perhaps we feel that we cannot do much to help, but let us not use that as a reason to do nothing!

Dr Terence Ascott is the founder  and International Executive Director of SAT-7. Since the start of the Syria crisis, the network has supported Syrian people with dedicated programming including For You, Syria, worship broadcasts from within the country and a stream of education programmes, My School, to help displaced and refugee children continue their education.