You are here: Home / Features / Understanding the so-called 'coup' in Egypt
Search

Understanding the so-called 'coup' in Egypt 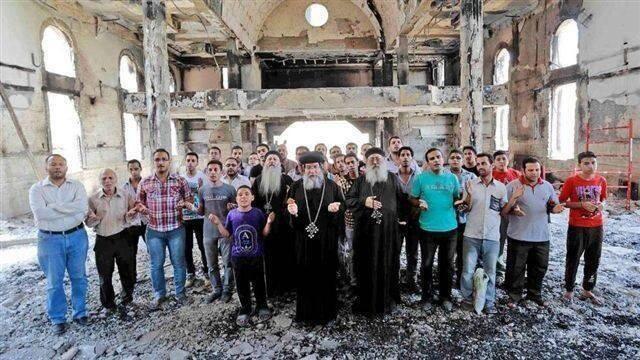 Recent political events in Egypt, especially security force conflicts with the Muslim Brotherhood, have highlighted both deep divisions within Egypt and between how the situation has been viewed in Egypt and abroad.  All people with a concern for human life have been deeply distressed by the violence and numbers of deaths in clashes between protesters and security forces (over 800 including 70 in security forces), but Egyptian Christians and many others who called for Mohammed Morsi’s departure, are perplexed at the way the situation has been reported and viewed abroad.

Dr Terence Ascott, International CEO of SAT-7, has issued a statement on behalf of Christians in ministry in Egypt to explain why so many were dismayed by the foreign reporting of events. He said he wants to correct “misunderstandings about the situation … being propagated by even normally balanced international media” and “the way it has, in general, portrayed the Muslim Brotherhood as the victims of injustice”.

He wrote: “On behalf of myself, Ramez Atallah (General Secretary for The Bible Society of Egypt), Pastor Fayez Ishaq (part of the leadership team at Kasr El Dubarrah Evangelical Church), other ministry leaders in Egypt and the leadership of Middle East Concern, please allow me to paint a bigger picture of what has been going on the past year or so.”

Dr Ascott began by questioning Brotherhood claims that they were the party representing the democratic will of Egypt. He said, that that while former President Morsi was elected “democratically” in June 2012, this was “only by the slimmest of majorities, and only 13 million people (out of a total population of 83 million) voted for Morsi at all”.

Dr Ascott says that Morsi, nevertheless, “took this as a mandate to do as he wanted, with a winner-takes-all attitude. His new government was not inclusive and he quickly appointed former Muslim Brotherhood leaders (some with previous convictions for violence or incitement to violence) to serve as regional Governors or government Ministers. In November 2012, he illegally gave himself new sweeping powers to act without censure, and rushed through a new pro-Islamic constitution despite the protests and boycotts from liberals, moderate Muslims and Christians, and then he refused to call for new elections – as had previously been agreed to do after a new constitution had been adopted.”

Dr Ascott underscores the dismal management of Egypt’s failing economy “by the new Ministers, whose only apparent qualification for office was the fact that they were Muslim Brotherhood loyalists. By the end of 2012 the country’s infrastructure had begun to fall apart, electricity and fuel supplies became unreliable, prices for basic commodities soared and Egypt struggled to get much needed international financing.”

The vote on the street

Ascott continues: “By the 30th June 2013 on the first anniversary of Morsi’s election to office, the Egyptian people had had enough! Perhaps as many as 30 million people came out to demonstrate against Morsi continuing in office – this included many who had voted for Morsi a year before and, even if the figure of 30 million cannot be independently verified, it is clear that the number of people on the street was far more than the number of people who had ever voted for Morsi. But, unlike the President of any normal democracy, he refused to go, or even seek a renewed mandate through new elections – confirming to many that the Muslim Brotherhood were just using the new democracy in Egypt to establish a theocracy.

“In a situation like this, the last line of defence for democracy is the army. They alone have the power to re-start the democratic process and, by (very) popular demand and with due notice, the army did step in and remove the former President – to the absolute delight and relief of MOST Egyptians!”

The SAT-7 Chief Executive says that the six-week occupation of a number of public squares by Muslim Brotherhood supporters calling for the reinstatement of the former President was “unlike the peaceful occupation of Tahrir Square by demonstrators in January 2011, and again at the end of June 2013”. Instead, “These Muslim Brotherhood occupations were dominated by calls for violence against the army, the police, the liberals and, specifically, the Coptic Christians in Egypt – all resulting in the violence witnessed on 14th August, when police stations, hospitals, private and and public property were destroyed. Many Christian churches (at least 40), homes and businesses were also attacked, as well as a monastery, three religious societies, three key bookshops belonging to the Bible Society in Egypt, three Christian schools and an orphanage.”

Human rights organisation Minority Rights Group International (MRG) commented: “Investigations of the incidents paint a disturbing picture of a community under siege, inadequately protected by security forces” and noted how even the Coptic Pope has received death threats.

Despite this, the reaction of the churches has been marked by faith and restraint. Dr Ascott said, “The Coptic Orthodox Pope, HH Tawadrous II made a statement about the attacks on churches this week, saying that ‘this had been expected and, as Egyptians and Christians, we are considering our church buildings as a sacrifice to be made for our beloved Egypt’. Other church leaders have made similar statements, stressing that church buildings don’t make the Church but the church is the Body of Christ, made of people who have their faith in Him, and that is getting stronger as it passes through these challenging times.

“It is also important and encouraging to note that some Muslims went to protect churches and that, in return, many Christians then sent messages to their fellow Muslim citizens saying, “Buildings can be rebuilt again, but you are priceless, so stay safe, and don’t worry about the churches”. And the Egyptian government announced that the State would take the financial responsibility for the rebuilding of damaged churches.

Dr Ascott concluded: “The Muslim Brotherhood have been, and remain very effective in portraying themselves as the victims to the media, pointing to how Morsi had been ‘democratically’ elected and that the army ‘coup’ was a major setback to the country’s democratic progress. They have known what buttons to push with the Western press and this seems to be the version that most of the World is hearing – but it is not a version of truth that resonates with the vast majority of Egyptians.

“And, while the loss of life these past few days has been most regrettable it has not only been Muslim Brotherhood supporters that have died, and there has been scant reporting on the Muslim Brotherhood’s attempts to destabilise Egypt, its calls for violence against the government and its supporters; and there has been a total lack of reporting concerning weapons that the Brotherhood had in the camps and used against the army as it sought to dismantle the sit-ins.”

In closing, Dr Ascott requested prayer on behalf of members of all people in Egypt– the largest in the Arab World, with the largest Christian Community in the Middle East. He asked, “Please pray that:

Image (above): Coptic priests and congregation hold service in burnt out remains of Bishop Moussa church in Minya, Upper Egypt

Last Friday (16 August) Dr Sameh Maurice asked his 7,000-member Kasr El Dobara Evangelical Church to stay at home and watch the service safely when it was broadcast with only 100 or so worshippers by SAT-7 ARABIC. SAT-7’s other worship programmes like Let Us Sing, its Bible teaching programmes and its Cairo-based current affairs show, Bridges, provide encouragement amid danger, curfews and uncertainty. A donation to SAT-7 ARABIC helps us bring truth and encouragement to them at this difficult time.