You are here: Home / Latest News / What's behind the conflict in Syria?
Search

At the time of writing, the situation in Syria is rapidly changing. On the 2nd November it was announced that the Syrian government agreed to stop all violence against protestors. However, there are new reports that there has been more conflict in the city of Homs. Colin Chapman has worked in the Middle East, for nearly twenty years and is the author of ‘Whose Promised Land?’ and ‘Whose Holy City?’ He shares some helpful insights about the context of the Syrian conflict and some thoughts and concerns about the future of Christianity in the country.

Christians within Syria have been deeply divided in their responses to the conflict which began in the spring this year. Before noting these different responses, we need to try to understand the background to the conflict and some of the significant developments since it started. 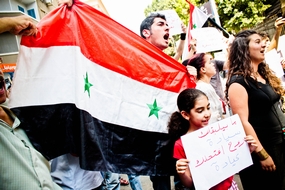 The protests began as a spontaneous outburst of anger following the arrest of a whole class of children in the southern city of Dera‘a, who had written on a wall one of the slogans used in other countries caught up in the Arab Spring.

As in Tunisia, Libya and Egypt the protesters have been angry about their one-party police state, corruption at every level of society, abuse of human rights, lack of freedom of speech, poverty and unemployment.

There are, however, several things that are unique about the situation in Syria:

Some of the lower ranking soldiers have deserted from the Syrian army after refusing to shoot an unarmed civilians, and they have been joining together to attack the Syrian army.

President Assad has at several stages announced that he is willing to respond to some of the demands of the protesters, and it seems that the majority of Syrians have welcomed these offers. However the protesters feel that too little has been offered too late, and that few of the concessions that have been announced have actually been put into effect. The protesters therefore say that they will be satisfied with nothing less than the fall of the regime.

Many outsiders fear that the continuing conflict could develop into a real civil war. It is still not clear whether the protestors are able to offer a coherent and convincing alternative to Assad’s regime.

The majority of Syrian Christians of all denominations seem still to support the regime. Some, when questioned by people outside the country, downplay the extent of the protests, saying that they are limited to a small number of areas and that life in most places continues as normal. Others, while privately critical of the regime, want the government to implement reforms rather than be completely brought down. They fear that the Sunni majority would want to take power and that any new government would want to be more clearly Islamic.

Observers outside the country, like many Christians within the country, are fearful that if the Assad regime were to fall, Christians would inevitably be punished for their identification with the present government. Philip Jenkins, the American historian, is very fearful of what might be the fate of Syrian Christians. In an article in April entitled ‘The Death Warrant of Eastern Christianity’, he wrote:

‘… debates over intervention have missed one overwhelming argument, which is the likely religious catastrophe that would follow the overthrow of the admittedly dictatorial government. Any Western intervention in Syria would likely supply the death warrant for the ancient Christianity of the Middle East. For anyone concerned about Christians worldwide – even if you firmly believe in democracy and human rights – it’s hard to avoid this prayer: Lord, bring democracy to Syria, but not in my lifetime.’

There is one striking precedent in history to which he can point: a number of Christians were associated with the Mongol invaders in the early years of their invasion of the Middle East in the 13th century; but when the Mongol rulers adopted Islam rather than Christianity as their religion, Christians experienced heightened persecution. It seems that when Christians back what turns out politically to be ‘the wrong side’, they may have to suffer severe consequences.

At the time of writing the situation in Syria is rapidly changing. Commentators are unsure of how events will unfold. All we can do as on-lookers is to pray for God’s peace to reign: