On Sunday 8th September, Middle East Christian broadcaster SAT-7 aired footage of Egyptians worshipping in the remains of the Evangelical Church of Beni Mazar. Located in the town of Minia, Upper Egypt, it was one of over 80 Egyptian churches targeted in violent attacks during August. This special episode aired as part of the SAT-7 programme, My Church.

Dark smears mark where flames licked the outside walls of the church building after arsonists set it ablaze. The charred hull of the interior is crumbling and peeling where wood and paint previously existed. Singed wiring hangs loose from the ceiling. On 14th August, Reverend Hany Jacque received a phone call notifying him that angry rioters had broken in the door of the church. For seven hours, the rioters stole furniture from inside, broke the glass windows, and burned the church’s books, including its Bibles. They also looted and burned its community services building next door, which had provided medical and financial assistance to all the residents of Beni Mazar, regardless of their religion. 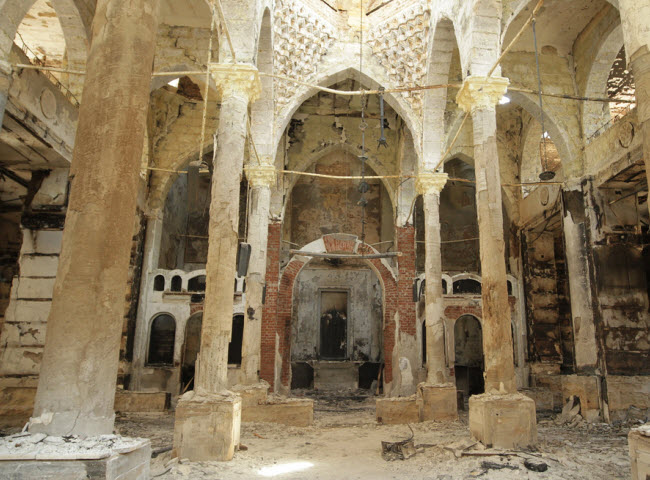 Reverend Jacque reflected on the destruction, “The Church is not walls and buildings. The Church is us, the people of God. They burned and destroyed the building, but it will never be possible for them to burn and destroy the Church because the Church will remain forever. If this was the cost for the God’s people in this place, that’s alright. Pay it, because God’s people must always speak the truth… This is a small price to pay for us to speak the truth.”

During the service aired on SAT-7 this week, congregants filled the desecrated building with songs of praise and the words of Scripture. Congregants sang, “Jesus, we bless your name.” They joined hands and prayed that God would accomplish His will in the Church. The song leader encouraged the congregation, saying, “The joy of the Lord is your strength…God’s glory in the midst of the Church is a sign for what is coming in the land of Egypt. The Church will be filled with glory.”

Reverend Jacque preached a message from Haggai 2. He read encouragement from the Word to the congregation, saying, “‘The glory of this present house will be greater than the glory of the former house,’ says the Lord Almighty. ‘And in this place I will grant peace,’ declares the Lord Almighty.” Towards the end of the service, Reverend Jacque asked Church members to forgive the rioters. He quoted what Jesus said of his attackers on the cross: “They know not what they do.” The reverend emphasized that while they would have a new building, it was just as important that all things become new in their hearts and their thinking. Another church member closed in prayer, saying, We turn our eyes today from our surroundings to your Lordship…and, we pray today for everyone who wronged us, with all love; for each one who extended his hand with an axe, for each one who extended his hand with fire, or stole from the Church.”

Attacks targeting Christians intensified after former president Mohamed Morsi was removed from power. Dr. Terence Ascott, SAT-7 CEO, reflects on the response of Egyptian Christians: It is evident that the almost universally non-violent response to these attacks (the worst assault on Christians in Egypt for almost 600 years) has greatly impressed many Muslims. This has been a very public turning of the other cheek by the Christians of Egypt, and a very public act of obedience to Jesus’ injunction for His followers to ‘…love your enemies and pray for those who persecute you’. (Matt 5:44)” 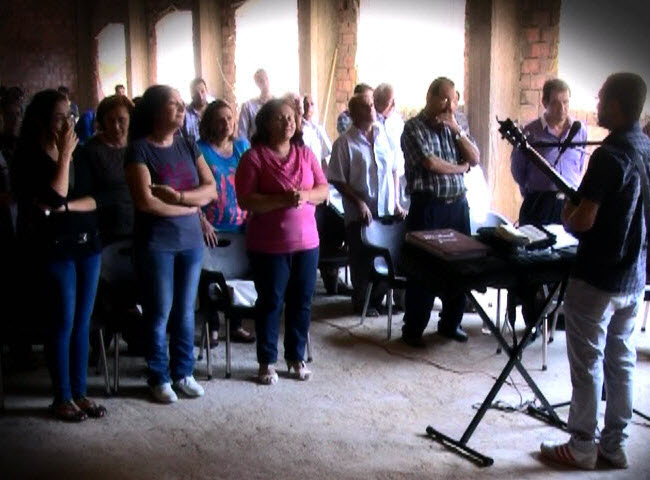 Some Christians are leaving Egypt in hopes of greater security and better economic opportunities, but there is also a spiritual revival taking place among those who remain. Programming Manager George Makeen, an Egyptian citizen, is optimistic about the new opportunities that the revolution brings. He says, “People try to find ways to co-exist and live together, as they now feel responsible for their safety and their future. There are still major problems with a of lack of trust and misunderstandings, but I think we are moving forward, toward better knowing and respecting each other.” Makeen sees improvements in education as the key to a brighter future for Egyptians and believes a SAT-7 programme could shed light on this. Current public school curricula do not provide an accurate presentation of national history, or teach the components of a democratic system. Given the opportunity, Makeen would also arrange for SAT-7 to do more filming in rural areas to raise awareness of the problems residents outside the cities face. In the meantime, SAT-7 provides a broad platform for reaching and teaching Arabic speakers throughout the region with Christ’s message of hope and reconciliation.