Baghdad Iraq Mosul news SAT-7 ARABIC SAT-7 KIDS Syria Terrorism
SAT-7 viewers in Iraq are among those at risk as a result of the advance of militant groups in the north of the country. SAT-7 ARABIC is calling on viewers to pray for them (see pic: “We pray for the people of Iraq. Pray with us.”) In this report, SAT-7 founder Dr Terence Ascott and a Middle East analyst comment. 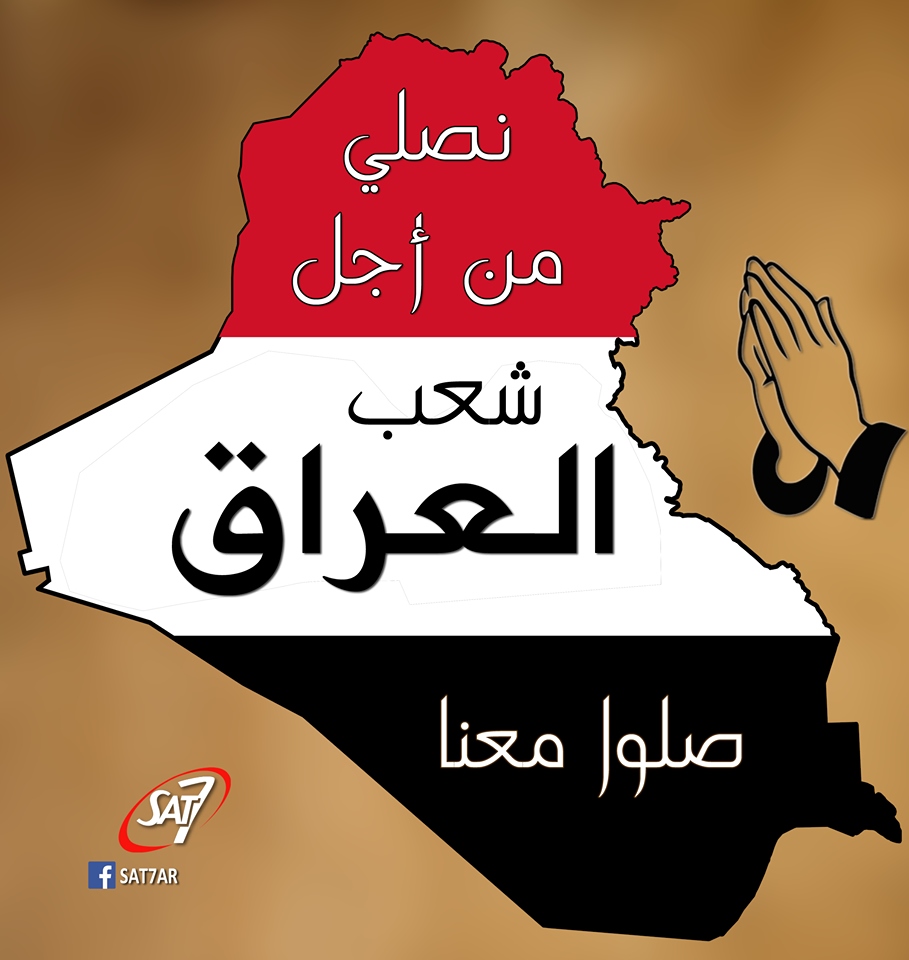 The rapid advance of militant forces led by ISIS (Islamic State of Iraq and the Levant) in Iraq this week has caused international alarm. The group seized Iraq’s second city of Mosul on Tuesday and continued their advance into the surrounding region of Nineveh, areas of Kirkuk and Salaheddin province, and overran Tikrit, only 100 miles north of Baghdad on Wednesday. Iraq’s foreign minister, Hoshyar Zebari, said the seizure of Mosul must push the country’s leaders towards working together to tackle the “serious, mortal threat” facing Iraq.

The developments will be of urgent concern to many SAT-7 viewers in Iraq, where 1 in 3 children in Iraq watch the SAT-7 KIDS channel and a devoted adult audience watch SAT-7 ARABIC.

World Watch Monitor reported on Tuesday (10 June) that up to 1,000 Christian families had fled Mosul. Chaldean Archbishop Archbishop Amel Nona told Aid to the Church in Need (11 June) that he thought Mosul’s last remaining Christians had left the city – once home to 35,000 Christians – after “we received threats”. Many had flooded intoChristian villages in the neighbouring plains and were sheltering in schools, and empty homes, he said.

Only last week, SAT-7 Chief Executive Dr Terence Ascott and colleagues visited Baghdad and said how impressed he was “to see the positive attitude of [the] government towards Christians and their real desire to get Christians to stop leaving the country and offering churches around-the-clock security”. He also spoke of their keenness to offer SAT-7 assistance in providing resources for programme making and possible live broadcasts.

In contrast, he said, this week’s news of the jihadist advance “is a very depressing situation and it would seem that the whole Iraqi/Syrian/Levant area is beginning to unravel!

“What can we do other than pray?” He asked, “We can ask WWJD (What would Jesus Do)? He would have had compassion. He would have gone about helping the needy, ill and infirm and speaking up boldly against violence and injustice – but without becoming political or politicised. He would have cared for people’s practical needs, their state of mind, their attitudes, values and their relationship with God – and address all of these things through the lens of eternity. May God help us to do the same, in whatever ways he has equipped us to respond to such a tragedy.”

So what will the latest developments mean for Iraq? Middle East analyst Ziya Meral told SAT-7 “It is too early conclude what the outcomes might be for Iraq and what responses it would attract from regional powers. Alongside ISIS, which gets the main media attention, there is a wide range of other Iraqi groups and strong Sunni support for ongoing campaigns due to central government policies that have alienated them. Kurdish authorities in Iraq are likely to seize the moment and extend their control areas into disputed Kirkuk.

“Meanwhile, Prime Minister Nouri Al-Maliki is recruiting Shiite militants to fight as the Iraqi army seems unfit to defend the country. Tens of thousands of Iraqi troops simply left towns [in the face of] ISIS attacks without a fight. However, a strategy depending on Shiite militants would further destabilise Iraq and add to Sunni concerns. The incident shows that the civil war in Syria is deeply affecting all other countries in the region. How the US, NATO, EU and Friends of Syria group of countries, including UK, will respond to this is not clear. “