The brother of two of the 21 Coptic Christians murdered in Libya, last night used live television to thank their killers for including the men’s declaration of faith in the video of their execution. Christian channel SAT-7 ARABIC has become a mouthpiece for the families of the young men over the last six weeks since they were first abducted. 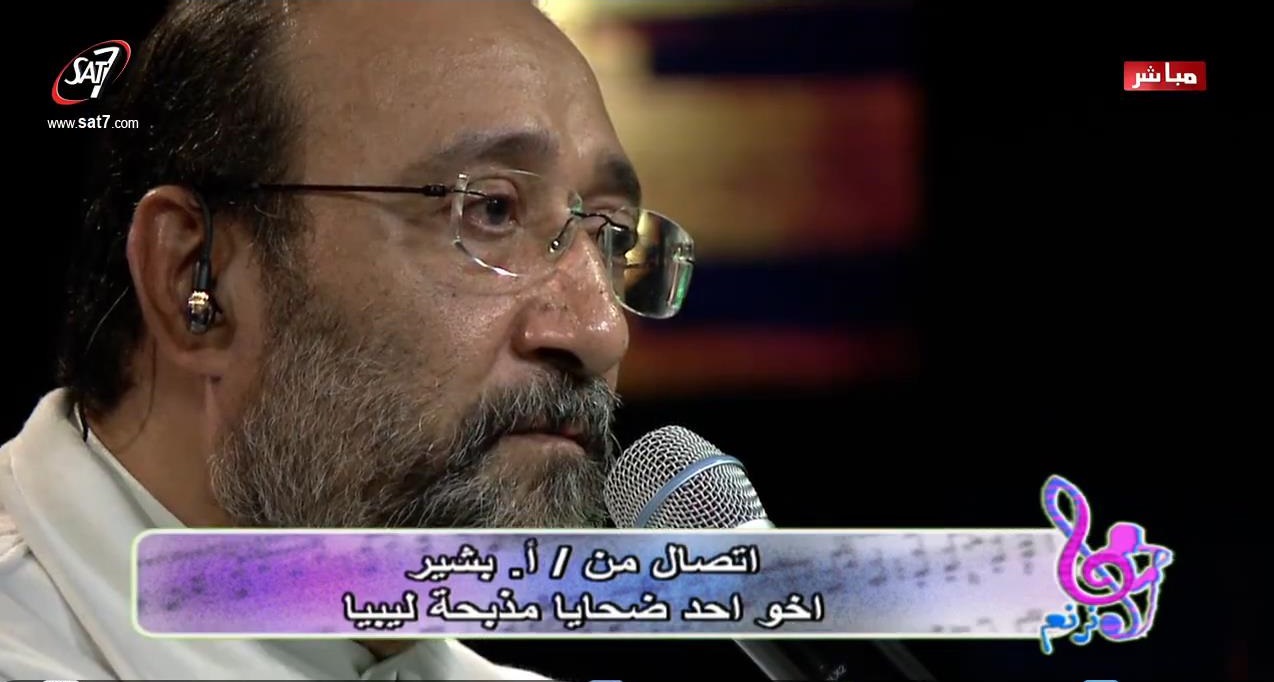 Beshir called into SAT-7’s weekly live worship and prayer programme, We Will Sing, on Tuesday night (17 February). Programme host Maher Fayez was visibly moved as Beshir told viewers he was proud of his brothers, Bishoy Estafanos Kamel (25) and Samuel Estafanos Kamel (23), because they are “a badge of honour to Christianity”.

Beshir thanked Islamic State for not editing out the men’s declaration of belief in Christ because he said this had strengthened his own faith. He added that the families of the ex-patriate workers are “congratulating one another” and not in despair: “We are proud to have this number of people from our village who have become martyrs,” he told the programme.


Beshir told Maher Fayez, a widely respected and popular musician, that “Since the Roman era, Christians have been martyred and have learned to handle everything that comes our way. This only makes us stronger in our faith because the Bible told us to love our enemies and bless those who curse us.”


However, he said, the families suffered such a long and agonizing wait when their loved ones disappeared and because of this, the air strikes were a good response by the Egyptian government: “Only the length of the time period when we didn’t know where they were justified the air strikes for us. If they had been martyred on the same day they were kidnapped, we wouldn’t have asked for any retaliation.”

Asked by Maher Fayez if he would get upset if he was asked to forgive so-called Islamic State, Beshir related how his mother said she would react if she saw one of the men who killed her sons. “My mother, an uneducated woman in her sixties, said she would ask [him] to enter her house and ask God to open his eyes because he was the reason [her sons] entered the kingdom of heaven.”

Invited to pray for his brothers’ killers, Beshir prayed: “Dear God, please open their eyes to be saved and to quit their ignorance and the wrong teachings they were taught.”

After the programme was broadcast, Beshir’s comments drew remarkable levels of interest. Within hours of SAT-7 posting the clip on Facebook, it had been viewed 96,000 times. Since then it has received over 110,000 views and been shared shared approaching 5,000 times.

SAT-7 has been standing with the Egyptian workers’ families since they were first kidnapped at the end of December and beginning of January. An episode of the Bridges current affairs series on 24 January featured interviews recorded in El-Minya governorate with family members. Last Saturday’s episode (14 February) was made when there were conflicting reports about the men’s fate and included family protests in Cairo, calling for government intervention to rescue them. This weekend’s episode will feature new interviews made this week with the bereaved family members.

A donation from you today will help us to continue giving a voice to believers like Beshir, to unite Christians in prayer wherever “one member of the Body is suffering”, and to broadcast their messages of reconciliation and God’s love to wider society.