You are here: Home / Press Releases / MUSIC AND TESTIMONIES RISE FROM THE BEIRUT RUBBLE
Search

MUSIC AND TESTIMONIES RISE FROM THE BEIRUT RUBBLE

As the dust settled from the explosion that ravaged Beirut, stories of resilience, heroism, and faith flowed from the city.

On the SAT-7 ARABIC programme You Are Not Alone, viewers heard from the nurse who rescued three premature babies from a destroyed neonatal unit, from the “piano lady” who played on amid the chaos, and from a grieving man who clings to his Christian faith. 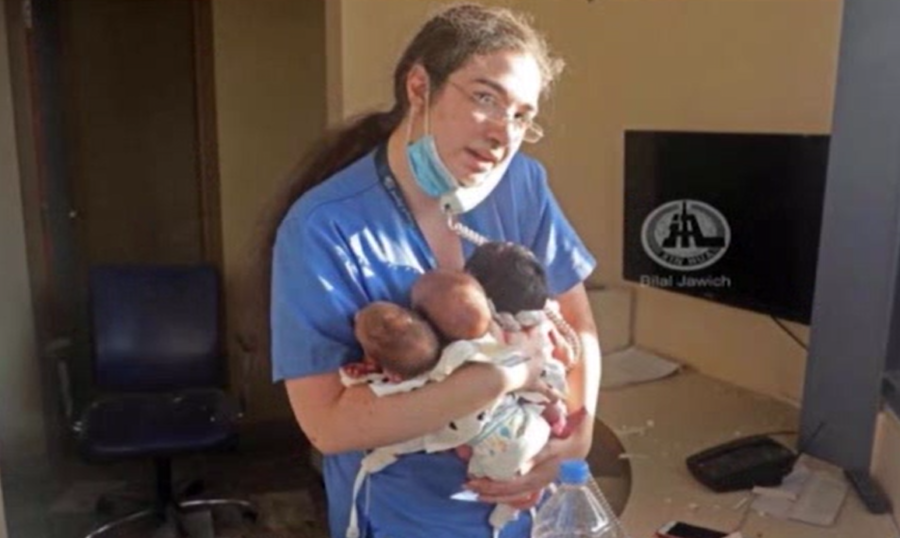 Pamela Zeinoun, a nurse at St George Hospital University Medical Centre, was knocked unconscious when the shockwave from the Beirut explosion collapsed the ceiling and internal walls of the neonatal unit.

After she came to and removed the debris lying on her, her only thought was for the newborns lying in incubators in the room: “I was so afraid I’d find the babies hurt under the rubble,” she said.

Relieved to find them safe beneath the debris, she gathered three of the newborns while her injured colleague carried a fourth. Their shouts for help brought others to force open a space in a blocked exit before they scrambled down four flights of stairs in blackout.

“After the explosion, everything was chaotic,” Pamela said. At ground level she found “a shocking scene of patients and nurses strewn on the floor, covered in blood, and others running frantically everywhere. Luckily, I found a doctor from our hospital who helped me carry the children and find a hospital to care for them.”

Together, clutching the four babies, they walked five kilometers to hail a taxi and reach a safe hospital.

Another guest who spoke to You Are Not Alone was 79-year-old Mai Melki. On the evening of the blast, the classic melody “Auld Lang Syne” was heard rising from her apartment building. She explained how she had stepped across her debris-strewn apartment floor, lifted the lid on her piano, and begun to play. As she played, she prayed.

“I began the song and said, ‘Thank you, God. You are the God of the universe. You know everything. You see who is in need.’ As she played, Mai said, she prayed for the injured and those with no-one to care for them.

Since then, Melki’s video has been shared widely on social media and encouraged many. Mai Melki is the mother of Camille Melki, founder and CEO of the non-governmental organisation and SAT-7 partners Heart for Lebanon.

FAITH IN CHRIST AMID CHAOS

Also on the programme was Roni Nahra, who lost his cousin Shady, 36, after the building he was in collapsed. In his interview Roni declared his faith in God despite the loss he is feeling.

“The first thing that came to my mind was ‘why?’ My cousin was a strong man and I expected him to survive it, but after 24 hours under the wreckage, he died. I’m consoled when I remember that he is with Jesus. He died in Christ and will be resurrected in Christ. This is the only consolation that I have,” he shared.

Roni gave a message encouraging everyone to hold fast to God: “If we don’t live every day with Jesus and spend time with Him, we won’t be able to face the current or future circumstances.”

You are Not Alone is a programme from SAT-7’s Lebanon studio that began broadcasting during the coronavirus pandemic. It has been the voice of many marginalised and unprivileged members of Arab society and will continue in the coming weeks to walk alongside viewers in Lebanon.